The typical white flour is not compatible with the low carb ketogenic diet. As you already know, the keto diet allows only a small amount of carbs so you can successfully go into the process of ketosis. For this reason, there is a great need to substitute flour.

Both coconut flour and almond flour have been used as low-carb flour substitutes and gluten-free recipes.

So if you want to know what is the difference between the two, their nutritional facts, how to use them, and in what ratios, then keep on reading!

What Is Coconut Flour?

Coconut flour has origins in the Philippines, where it was produced as a by-product of coconut milk. This flour has some unique nutritional value- it is the flour with the highest fiber content. It is also sufficient in fat, which is why it is a good choice for a keto dieter.

What is Almond Flour?

Almond flour or almond meal is made from ground almonds. It is made by blanching the almonds with boiling water to help remove the skin, and then they are ground and sifted into a fine powder that resembles flour. This process gives a white, fluffy, and smooth texture.

There is also unblanched almond flour, where the skin of the almonds is left on them and they are finely ground to flour.

Almond meal is another flour substitute made from ground almonds. The difference is that almond meal is made from almonds whose skin is intact, and it has a consistency somewhat like cornmeal, as opposed to almond flour, which is more finely ground.

Almonds have great nutritional value, as they are high in polyunsaturated fats- omega 6 fatty acids and vitamin E.

In the table below we have the nutritional information comparison between coconut flour and almond flour on 100 grams of each. (*), (*)

Both these flours are keto-friendly and are widely used in the keto community. But, how do you use them in the kitchen? What ratios and can you substitute one for the other? Despite both being a substitute for wheat flour, they do not have that many common properties.

Nutrition-wise, just by looking at the table with the nutritional information you can notice that almond flour contains 200 calories more than coconut flour, however, coconut flour has a higher net carb content at 26.7 grams in comparison to almond flour, which is at 14.33 grams of net carbs per 100 grams serving.

Almond flour is made from almonds and they are rich in polyunsaturated fats- omega 6 fatty acids, as well as magnesium. Magnesium has therapeutic and disease preventative properties. Almonds are also rich in vitamin E. Vitamin E is connected to lowering the risk for cardiovascular disease in both men and women, as well as lowering the risk of developing Alzheimer’s disease. (*) (*) (*) (*)

However, with the processing and exposure to heat, you may have some loss of the nutrients in the almond flour.

Coconut flour is a by-product of coconut milk, therefore some of the nutrients that coconut meat contains are filtered when making the coconut milk. But, some still stay in it. Coconut meat is rich in manganese, which helps fat metabolism and enzyme function, and copper, which can contribute to bone formation and heart health. (*) (*)

It also contains medium-chain triglycerides or MCT oil, which are beneficial fats that when ingested, they go to the liver and help in the production of ketones for energy. This mechanism can aid weight loss with the feeling of fullness, fat burning, and calorie burning. These fats are also heat-stable, so they can endure the baking and cooking process. (*) (*) (*)

Additionally, coconut flour has the highest fiber content out of all types of flour. The high fiber amounts contribute to the feeling of fullness which can help with weight loss and appetite regulation. (*) (*)

How to Use Coconut Flour and Almond Flour

Coconut flour has a tendency to suck up more liquid in comparison to almond flour, therefore most recipes require less flour and more wet ingredients. If you do not add enough liquid, it results in very dry and even crumbly food.

When you cook with coconut flour, after mixing the wet and dry ingredients, you need to give it some time to absorb the liquid.

Almond flour is moister when compared to coconut flour or even wheat flour.

Another difference between the two is an obvious one – their taste. Coconut flour has a sweeter, more generic taste, and almond flour has a nutty, almondy flavor. The nutty flavor is great if you want to add some of that flavor to your food, but if you don’t want it,  sometimes it can be hard to mask the taste.

Cooking with almond flour is more beginner-friendly, while coconut flour might be more difficult to use for those who are not experienced in using it.

Now, you may be wondering how do you substitute wheat flour with these keto-friendly flours?

Here are some low-carb recipes using coconut flour you can try:

Here are some low-carb recipes using almond flour you can try:

Both of these flours are keto flour and they are commonly used in many low carb recipes. So, therefore both can be good for the keto diet. Ultimately it all depends on what you prefer. For that purpose, you can look at the summary of the overall differences between the two in the table below.

How many net carbs does coconut flour have?

Coconut flour contains about 27 grams of net carbs per 100 grams.

How many net carbs does almond flour have?

Can you substitute coconut flour for almond flour?

Yes, you can substitute coconut flour for almond flour, especially in low-carb and keto recipes. However, coconut flour consumes more moisture and liquid so you need to adjust the recipe ingredients to make sure it works. Each recipe is different so you need to try to know.

Both of these flours are ketogenic and can be used on the keto diet. Many store-bought low carb desserts use coconut flour or almond flour or a combination of both.

Almond flour is easier to use, while coconut flour is more tricky to use for beginners because of its absorbency. Overall, it is up to you which one you prefer to use, or you can also use both together or apart to combine both of their properties. 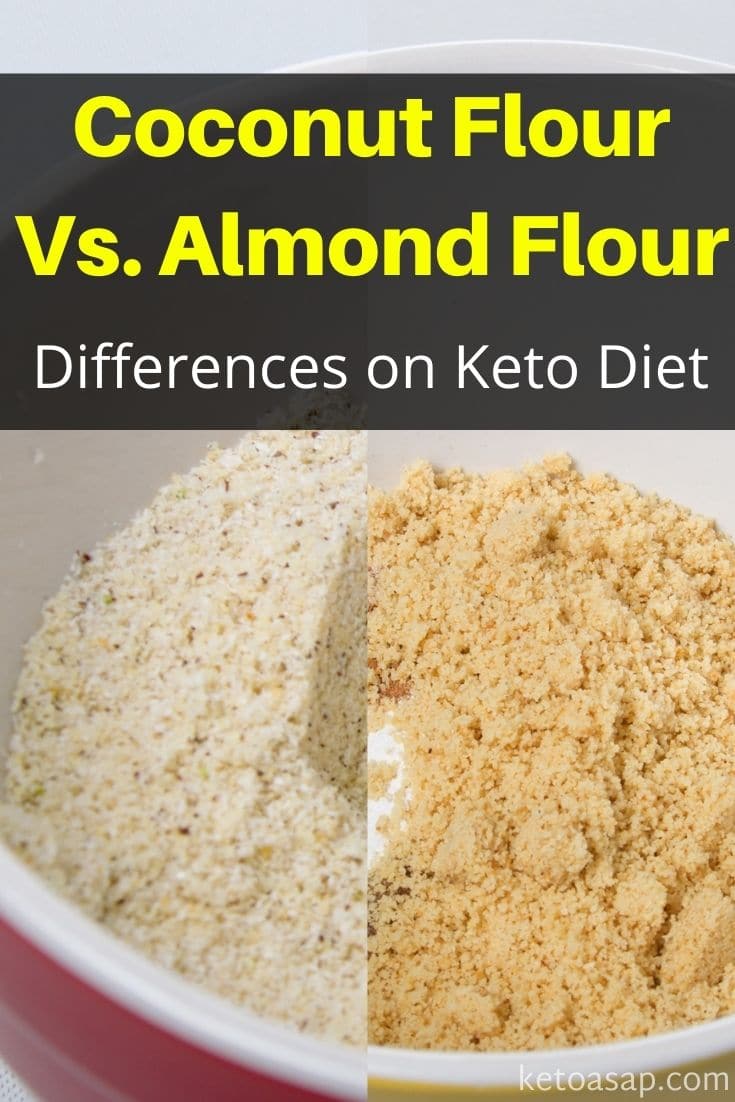