Meat or vegetable dishes go especially well with a nice, creamy sauce drizzled on top of them, or a creamy soup as a starter.

Unfortunately, traditional sauces and soups are usually made with flour or cornstarch that act as a thickener which gives them the creamy, rich texture.

However, adding flour or cornstarch is not an option when you are trying to eat a low-carb, keto diet with as little at 20 grams of net carbs per day.

Why Cornstarch Is A Bad Choice For Keto Diet

As you probably already know, flour and cornstarch are high in carbs and therefore not suitable for the low-carb keto diet and they should be avoided.

The high amount of carbs makes cornstarch a bad thickener for keto. To find out the best low-carb and keto thickeners, keep on reading.

What Are The Best Low-Carb Substitutes for Cornstarch

Below is a list of alternatives to cornstarch which you can use as a thickening agent for your frying, baking, pudding, custard, sauce and gravy recipes.

This keto thickener is the most widely used substitute for wheat flour and cornstarch in keto recipes for sauces, soups, smoothies, etc. That’s because it is the only ingredient that can make keto sauces and soups look, taste and have the same texture as regular do.

Xanthan gum is an extremely common food additive that acts as a stabilizer, binder, emulsifier, and thickener when added to any liquid. This is possible because xanthan gum is made out of soluble fiber which absorbs water and creates a creamy texture. (*)

Xanthan gum is sold in powder form and it is great for keto cooking because it is very keto-friendly with 0 net carbs in it.

Xanthan gum works best when cooking sauces such as gravy and bechamel sauce where it acts as a thickener.

When you want to thicken the sauce or soup and substitute flour or cornstarch, ½ teaspoon of xanthan gum should be enough for 3 cups of liquid, but if it is still too liquidy, you can always add a little more until it’s as creamy as you like it.

You can find xanthan gum in common grocery stores such as Whole Foods, Trader Joe’s and Sprouts. You can also order it online on sites such as Amazon.com.

If you don’t like xanthan gum, there are many other alternatives to xanthan gum you can use.

Glucomannan powder is deprived of the roots of a plant called Konjac plant. It is commonly used in tablets to help suppress appetite and it can also be used in cooking as a low-carb, gluten-free and keto substitute to cornstarch. (*)

Like xanthan gum, glucomannan powder is also made from soluble fiber that can absorb liquid which can create a feeling of fullness and that’s how it helps with the control of appetite. That is also why it is often also used as a thickener as it does the same thing when added to a sauce. (*)

Glucomannan powder works best when you want to thicken the bone broth, as it doesn’t take away from the broth, while it thickens it just enough.

When used as a thickener, glucomannan powder should be first whisked well with some cold water and then added to the hot liquid, otherwise, if you add it directly it might make it lumpy because it will clump up from the high temperature.

Usually, 1 teaspoon of glucomannan powder is recommended for thickening 1 cup of liquid, but there is room for you to experiment with the dose depending on how thick you want your sauce to be

You can find Glucomannan powder at Walmart and you can also order it online on sites such as Amazon.com.

Guar gum or often called guaran is extracted from guar beans with a process that is similar to how xanthan gum is extracted. It is used for its thickening and stabilizing properties in the food industry along with feed and the industrial industry. (*)

Just like the above suggestions, guar gum is also low in calories and is mainly composed of soluble fiber which absorbs water and that how it affects the viscosity and thickens the liquid. (*)

In comparison to flour, guar gum has the ability to absorb more water. Keeping this in mind,  when making the keto and substituting the flour or cornstarch you need to use one-sixteenth of what the recipe says.

This means that if the recipe says to use ¼ cup of flour, you need to use ¾  of a teaspoon of guar gum.

You can find guar gum in some grocery stores, and you can also order it online on sites such as Amazo.com

Coconut flour is made from dried and ground coconut meat and has a slightly sweet and coconut taste.

It has the highest fiber content in comparison with other flours, high-fat content of almost 60%, but it also has a low-carb content which is great for low-carb and keto cooking. (*)

Most coconut flour carbs are soluble fiber which means that it absorbs water and thickens liquids. This can happen in the gastrointestinal tract or you can use this ability before and then add it to sauces such as gravy. (*)

When using coconut flour as a thickening agent, it is best to whisk it with one part of cold water until it creates a slurry. Then you can add the slurry to the simmering liquid. Then just mix them together until you like the consistency.

You should be able to find coconut flour in every grocery store, as well as online on sites such as Amazon.com.

Chia seeds are the seeds of the Salvia hispanica or the Salvia columbariae plant. They are plants which are in the mint family, the first one being native to Central America and the second one to Mexico.

They are small, oval seeds that can be grey, black, white or brown in color and they have an ability to be hydrophilic.

The hydrophilic ability they possess is exactly why they are good for thickening- they absorb up to 12 times their weight in liquid when they are soaked. Then they develop a mucilaginous coat around them that gives a gel-like consistency to the liquid they are soaked in.

They are also rich in fiber, omega-3 fatty acids, zinc, calcium, phosphorus and protein, but they are low in carbs, making them keto-friendly. (*)

Chia seeds work best when making chia pudding and also in smoothies. They tend to thicken a little slower than the thickeners above, so for best results give them 2-3 hours.

Chia seeds are available in most common grocery stores such as Kroger, Trader Joe’s, Walmart, Publix, Aldi, Target, Whole Foods, and Safeway. You can also order them online on sites like Amazon.com.

Psyllium husk is a very popular plant-based, low-carb, keto thickener that comes from a plant called Plantago ovata. It almost has no calories and is entirely made out of soluble fiber, therefore it doesn’t have any net carbs.

It works as a thickener when the fiber absorbs the liquid it is added to, and then it creates a gel-like consistency. Psyllium husk is tasteless and low carb, as well at extremely low calorie, and that’s what makes it a great keto thickener.

Psyllium husk works best in keto baking because it can recreate the texture that the non-keto baking goods have.

You can find psyllium husk in the health sections and gluten-free sections of larger grocery stores, as well as online on sites like Amazon.com.

Flax seeds or linseed are the seeds of the Linum usitatissimum plant. The plant is used by the textile industry as well as the food industry. The flax seeds are small and come in two different colors: yellow (gold) and brown.

They have an ability, like chia seeds, to absorb water and create a mucilaginous coat, giving them the ability to turn liquid into a gel-like substance. But, unlike chia seeds, flax seeds have an outer shell that prevents the absorption of liquids, so when used as a thickener you should grind them first and then add them to the liquid.

Flax seeds work best in baking. This is because it can increase the texture of the baking goods, while still being low-carb and keto-friendly.

You can find flax seeds in any grocery store or market. You can also order it online on sites like Amazon.com

Agar-agar is extracted from Red Seaweed algae and it is popular in Asian cuisine, but in recent years it made its way to American kitchens. Agar-agar is made from two carbohydrates called agarose and agaropectin, but it still has a very low net carb content. (*)

The agar-agar that is used in food has two shapes, flakes and powder. Agar-agar is tasteless, low-carb and low in calories and therefore it is great for keto cooking. It is a great thickener and it is five times stronger than gelatin.

Agar-agar is a very strong thickener and it works best when you want gelatinous results such as puddings and yogurt.

When using agar-agar as a thickener you should let it simmer for a few minutes in the liquid and let it completely dissolve. Then let it cool down to room temperature and create its gelatinous consistency.

You can find agar-agar in some grocery stores or in Asian markets. You can also order it online on sites like Amazon.com.

Following a low-carb, keto diet does not mean that you won’t ever enjoy the tasty and creamy sauces, soups, ice cream or any of the tasty dishes you did before.

It just means that you need to be more conscious about what is in your kitchen and find alternative ways to cook your favorite dishes and enjoy them just as before, just without the carbs. 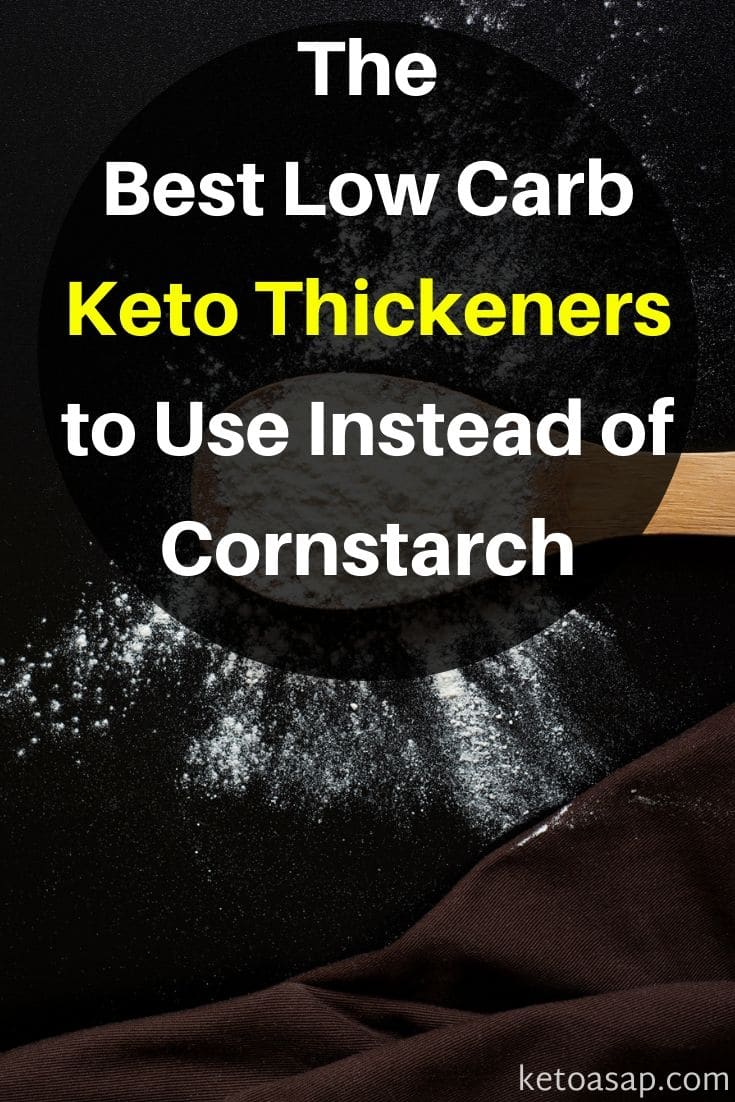