If you’re looking to create an authentic Indian dish, then you need garam masala. This warm and comforting all-seasoning spice can be added to meat, poultry, lentils, and more.

However, garam masala is not very popular in the United States, and your recipe could greatly suffer without the right spices.

In this article, we will discuss best garam masala substitutes you can use if you don’t have any on hand. We will also talk about the health benefits of Garam Masala and when to avoid it.

What is Garam Masala?

Garam masala is an Indian all-season spice that contains a blend of several herbs. It’s similar to a five-spice all-purpose blend and has a warm, spicy flavor.

The ingredients used to make garam masala vary by region as well as the cook’s taste preferences. It can also be adjusted to accommodate each individual dish.

This means that there is no standard recipe for garam masala.

Dessert dishes may call for sweeter herbs, such as cinnamon and cloves. Savory dishes may use a blend of cumin, bay leaves, and saffron.

Garam masala is usually prepared by toasted the whole herbs and then grinding them down into a fine powder.

What Is Garam Masala Made Of?

The recipe for garam masala varies from different brands. Here are some spices that can be used to make garam masala:

Garam Masala is traditionally added to meat before serving as opposed to during the cooking process. It’s also used in soups, stews, lentil dishes, cookies, baked goods, and more.

The nutritional information for garam masala may vary depending on the spices used.

The following is the nutritional breakdown of a one-teaspoon serving of cumin, which is a primary ingredient found in many garam masala recipes (1):

Because the constitutes of garam masala may vary by recipe, it’s hard to track down the exact health benefits of a generic garam masala blend.

However, most garam masala ingredients contain spices that have several proven benefits, especially when it comes to anti-inflammatory properties.

Here are some health benefits of garam masala and its most common ingredients:

Research shows that garam masala is linked to a faster whole gut transit time (2). This can help promote regularity and keep your digestive system running smoothly, which usually leads to reduced intestinal bloating and a better overall feeling.

The authors of one study tested individual components of garam masala to determine their antioxidant effectiveness in ground beef.

Results found that all spices were effective at lowering rancid odor and taste in cooked ground beef. However, cloves were the most effective at controlling lipid oxidation (3).

According to one study, cumin, which is commonly found in many garam masala blends, may help reduce weight, BMI, fat mass, and waist circumference in overweight or obese women (4).

Another study found that coriander helps prevent human platelet aggregation, which can protect against thrombosis by promoting blood flow to and from the heart (5).

Antimicrobial and antibacterial properties can help boost the immune system and fight the common cold.

Curcumin (found in turmeric and cumin) is especially beneficial for fighting inflammatory disorders.

One study found that curcumin contains antioxidant and anti-inflammatory properties that may help counteract the following conditions (5):

Due to their antioxidant properties, many of the spices in garam masala may help reduce blood sugar levels.

Research shows that curcumin (found in cumin and turmeric) reduces blood sugar in people with diabetes (5).

Cinnamon and ginger have also been shown to reduce fasting blood glucose levels and act as an antihyperglycemic agent (5, 6).

Curcumin is the active ingredient in cumin. It has been shown to help fight cancer cells by suppressing tumor growth (7).

Ginger and garlic have also been shown to possess anticancer activity (5).

Possible Side Effects of Garam Masala

Spices such as garam masala are generally considered safe when used in your favorite recipes because they only call for a small amount.

Some of the spices used in garam masala may have negative effects when taken in larger amounts.

For example, mace and nutmeg both contain a compound called solanine that may cause psychosis or hallucinations if you take too much of it (8).

Always consult your doctor before supplementing with an herb if you are being treated for a medical condition.

Yes, garam masala is keto-friendly as long as you use a small amount when cooking. It’s a great way to enhance the flavor of your favorite low-carb foods without overindulging in sugars.

Most spices are naturally low in calories, carbs, and sugar. They also tend to be great sources of antioxidants, which may be lacking in your keto diet.

We recommend incorporating different spices into your keto diet to change the flavor of your favorite recipes. Garam masala can turn any low-carb dish into a comforting delight!

What Can I Use Instead of Garam Masala?

Garam masala is a spice blend that contains many different flavors. Therefore, it’s hard to replicate this flavor combination using just one ingredient.

If you don’t have garam masala on hand, then we recommend combining several different spices together to replicate the flavor profile as best as possible.

To get the most authentic garam masala flavor, it’s best to go with toasted spices if you can find them. Here are the best replacements you can use:

Curry is popular in many Asian cuisines such as Indian, Thai, Vietnamese, etc… Depending on the type of curry and their origins, the spice mixture varies, but they normally consist of turmeric powder, coriander, ginger, curry leaf, cumin, cinnamon, fenugreek, clove, and chili peppers in their blends.

Although there are many different ways to make garam masala, almost all of them appear to contain cumin. You can mix cumin with a sweetener spice to get the desired flavor profile of garam masala using fewer ingredients.

Mace has a similar flavor profile as nutmeg, but many people state that it does not taste as sweet. Mace would work well with other savory herbs in meat dishes.

Nutmeg has sweet undertones and is usually added to desserts. Add it to cookies with cinnamon and cloves for a great flavor boost.

Turmeric contains the same active ingredient as cumin (curcumin). It boasts a brilliant, rich orange color that would work in place of cumin if you don’t have any.

Not all garam masala blends include saffron, but it would be a good spice to use if you want to brighten up your dish with a fresh, floral flavor.

Ginger has incredible anti-inflammatory properties and a mild flavor that would increase the nutritional value of any dish while continuing a zesty punch.

Cinnamon is not usually added to meat dishes, but it provides a sweet flavor that offsets a savory herb nicely.

Cloves provide a warm, comforting taste. Pair it with other “hot” spices to replicate the flavor of garam masala, such as cumin or peppers.

Garlic is a great addition to a savory herb blend. It mellows and becomes more flavorful as you cook it.

Black pepper helps enhance the absorption of some herbs, including the curcuminoids in turmeric and cumin. Be sure to add some to your dish anytime you cook with curcuminoids to get the full nutritional value from these spices.

Some people say that fennel tastes similar to licorice. Its warm, inviting flavor works well with other spicy herbs on this list.

Cardamon seems to be a staple among garam masala recipes. Pair it with cumin for the most authentic flavor blend using only two ingredients.

Chili peppers provide the “hot” spice that is found in many garam masala recipes. If you don’t like spicy recipes, then pair this spice with a sweeter flavor, such as ginger.

Star anise is a versatile spice that goes well with ginger, nutmeg, and mace. It can be used in sweet dishes or to offset a savory blend.

Pumpkin spice has a warm and inviting flavor similar to garam masala. Try adding it to vegetable-based dishes for a low-carb flavor enhancer.

Mustard has a spicy flavor that adds delicious heat to any recipe. Most people find that it’s not as overbearing as chili, which makes it a good spice for mild dishes.

You can use garam masala or any of its replacements in a variety of dishes. Mix some cumin with water to form a paste and serve it alongside your favorite foods.

You can also use it as a dry rub for meats or add it to soups and stews. It can be added to lentils or rice dishes (if you’re not keto).

Garam masala blends well with olive oil or butter. You can use it to make a marinade or even add it to dairy-based creams, such as sour cream and soft cheeses.

Garam masala is an Indian all-spice blend that varies by region and personal preference. It features a spicy, warm and sometimes “hot” flavor that gives many Indian dishes their authentic taste.

While it’s hard to replace this flavor with a single spice or flavor, you can combine several spices to replicate the taste.

Cumin seems to be a popular ingredient among most garam masala blends. You can use this as a substitute and add other spices to the mix that you have on hand.

Some good options include garlic, ginger, cinnamon, nutmeg, mace, and cardamon. You may have to adjust the sweet and savory ratio based on what you’re cooking.

Up Next: What Are The Best Alternatives to Paprika When Cooking? 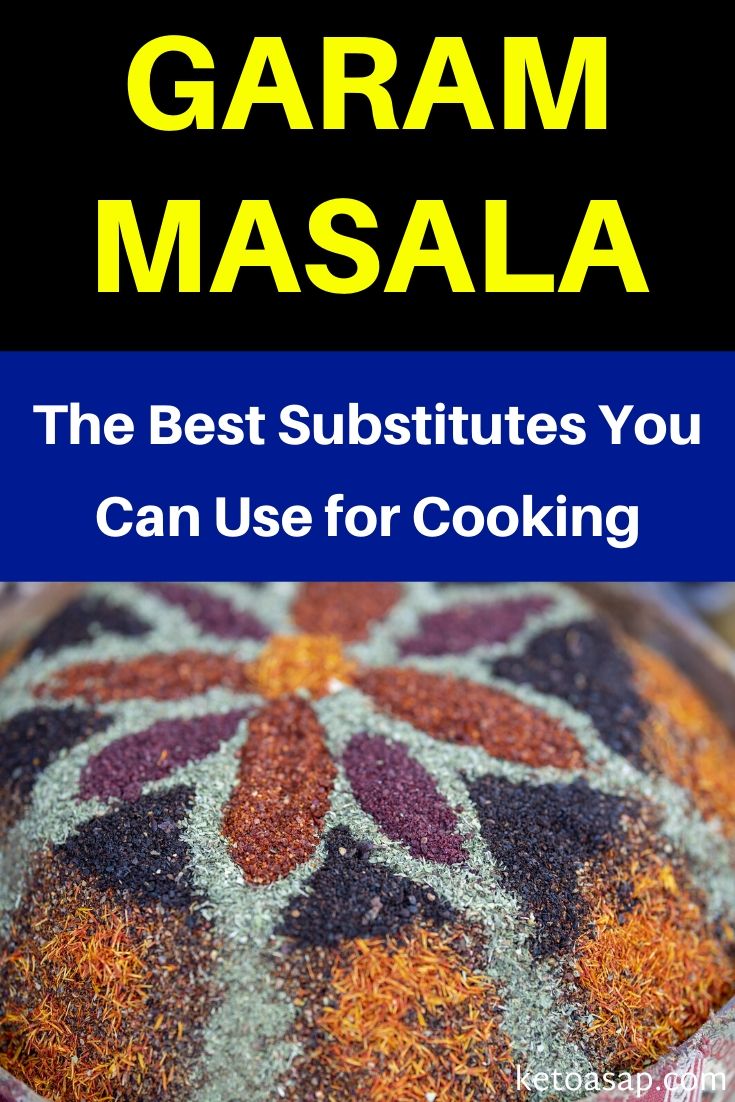