Apart from making any coffee a little bit better, it can be used to thicken pasta sauce, gravy, or any other pan sauce, and it can even be used as a milk substitute in baking.

What Is Half And Half?

While half and half is easily made at home by mixing equal parts of whole milk and heavy cream, most dairy companies will have premixed half and half packages.

Half And Half Nutritional Facts

In the table below is the nutritional information on 100 grams of half and half. (*)

Is half and half healthy?

Half and half is made out of milk and heavy cream. In 100 gram serving, there are 4.3 grams of carbs in half and half.

Whole milk is made out of 3.2% fat and most of its fat content is saturated fat. Because of this, sometimes it is viewed as unhealthy, but research shows otherwise. A review of 21 studies found no evidence of increased risk of cardiovascular disease and heart disease caused by the consumption of saturated fats. (*)

Another review of studies also concluded that there is no evidence that dairy fat increases the risk of obesity. (*)

Additionally, some studies show that drinking milk after physical activity can promote muscle repair and increase muscle strength, as well as decrease muscle damage and pain. (*) (*)

Milk is also rich in calcium, potassium, protein, phosphorus, and vitamin K2 (in grass-fed, full-fat dairy). There is also a study that links dietary calcium and bone health- it may have a role in preventing osteoporosis in women. (*)

Milk with reduced-fat or no-fat milk can be sometimes used in making half and half.

Heavy cream is a high-fat dairy milk product. In non-homogenized milk, the fat- which is less dense than the rest of the milk, naturally raises on top of raw milk and separates itself. That top layer of fat is the heavy cream. After it is separated from the milk, it is processed to kill any pathogens through thermal processing and applying high pressure. Some additives are almost always added for preservation purposes.

Heavy cream is keto-friendly. It is high-fat and low-carb and it goes well with many keto dishes and is commonly used in the keto diet. It is also rich in fat-soluble vitamins such as K, A, D, and E.

For example, our ketogenic Creamy Bacon Carbonara Zucchini Noodles contains heavy cream which makes this recipe a creamy overload for your tastebuds!

Or, for those that like some seafood, we have the Creamy Garlic Butter Tuscan Shrimp with Zoodles which you will not even believe are low-carb!

And for those with a sweet tooth, you can try our low-carb and sugar-free Avocado Coconut Truffles!

Can You Have Half And Half On The Keto Diet?

Half and half is made from equal parts of whole milk and heavy cream. You may have already heard by now that milk is not keto-friendly. However, it is such a common ingredient in our lives and it can be hard to get rid of it completely.

Besides, why is milk not keto-friendly? Milk is not ketogenic because it contains milk sugar called lactose, which can affect ketosis. Lactose is a sugar that does not raise the blood glucose levels as much as pure glucose would, but it can still significantly affect it if it is consumed in large enough doses.

How much does lactose raise blood sugar? This question can be answered if you know the GI or glycemic index of lactose. The GI is a relative scale where a number from 0 to 100 is given to foods to determine their effect on blood sugar in comparison to pure glucose which is at a 100.

Why is heavy cream keto-friendly? Heavy cream contains much less lactose than whole milk and therefore it will not affect blood sugar as much if consumed in low quantities.

To sum it all up, can you have half and half on keto diet? Technically half and half is not strictly keto-friendly, because it contains whole milk. Additionally, most brands who sell premixed half and half will add additives and more sugar in their products, which makes them even less keto-friendly.

However, if you are not following a strict keto diet, and you still want to add a splash or two of half and half in your morning coffee, then you can do that. Just be mindful about the serving size so that you can still be in ketosis.

For reference, a serving of 1 tablespoon or 15 grams of half and half in your coffee contains only 20 calories, 1.7 grams of fat, 0.4 grams of protein, and just 0.6 grams of net carbs. This makes it easy to incorporate it into your daily carbs if you really want to.

Is half and half keto-friendly?

No, half and half is not STRICTLY keto-friendly because it contains milk, which has a type of sugar called lactose. Additionally, some store-bought half and half products that may contain additives. However, you can consume it in small amounts if you want, just watch the serving size.

How many net carbs does half and half have?

Half and half contains 4.3 grams of net carbs per 100 grams and a splash of 1 tablespoon contains just 0.6 gram of net carbs.

Half and half is one of the ways to make even the worst coffee just a tiny bit better. Unfortunately, it does contain milk, which is not keto-friendly because it contains lactose- a type of milk sugar that can affect blood sugar and ultimately affect ketosis if it is consumed in large quantities. 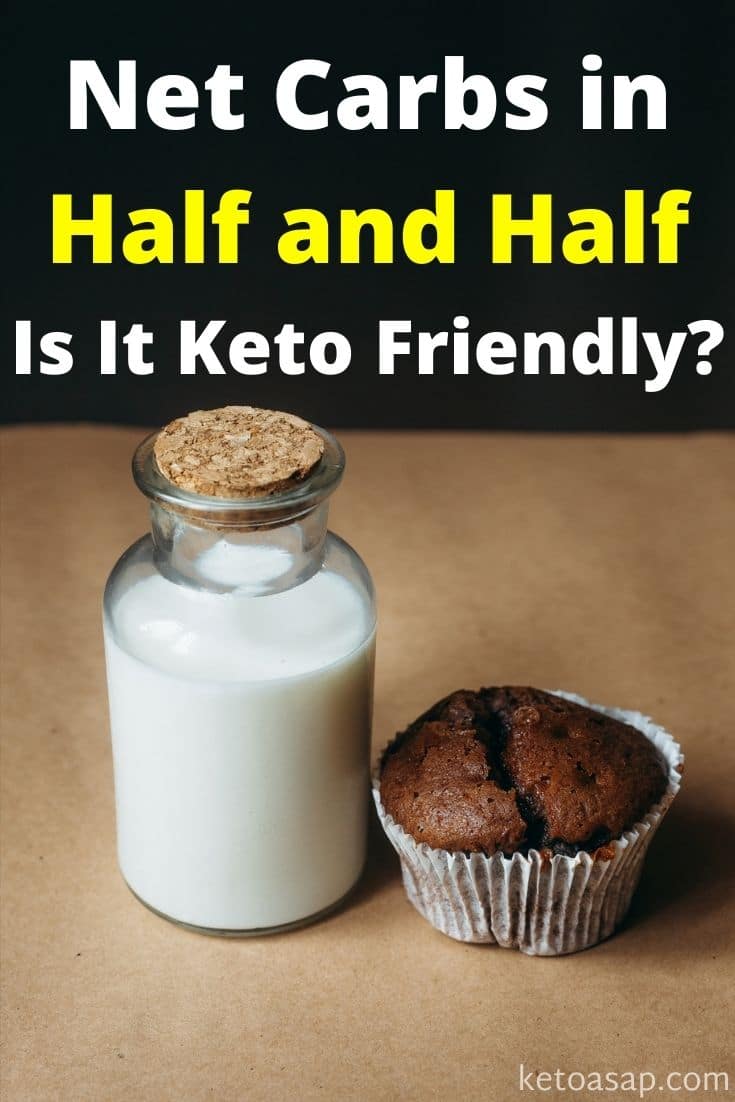