Edamame is commonly served as an appetizer in many cuisines, but mostly Asian cuisines. You can have edamame as a boiled, steamed, or fried, salty pre-meal snack.

However, edamame is a legume and it is commonly known in the keto community that most legumes are not ketogenic, therefore they are avoided in the keto diet. Yet, you can still come across edamame in some peoples’ low-carb or keto diets.

So, can you eat edamame on the keto or low-carb diet? Keep on reading to find out!

Edamame is an appetizer that people in Asia- mostly across China and Japan, make out of cooked green soybeans. The green soybeans are boiled, steamed, or fried, and then slightly salted to be served as a pre-meal delicious snack.

The use of soy and soy products on the keto diet is an already controversial topic. The reason is that soybeans are legumes and they contain a large number of carbohydrates. However, most of the time you consume soy in its mature form. Mature soybeans are taken out of the pod and then they undergo processing, such as baking or boiling to make tofu or tempeh.

But, that is not the case with edamame. You consume edamame in its immature form, with the beans still in their pods, which do not contain any alkaloids.

The immature soybeans contain less net carbs and more fiber in comparison with mature soybeans. The taste of edamame is similar to peas, and also their nutritional values are very similar.

In the table below, we have the nutritional information on 100 grams of cooked edamame. (*)

Even though it is a legume, edamame is a unique food. It is rich in plant-based proteins, fiber and is low in carbs.

Additionally, edamame is not only rich in protein, but its protein is a whole protein- meaning that it contains all essential amino acids your body needs to function. Some studies have even found a correlation between consuming soy protein, lowered LDL cholesterol, and risk for cardiovascular diseases. (*) (*)

Another benefit of consuming edamame is its low glycemic index and low insulin response. This makes edamame even more unique in comparison to other legumes which tend to have a higher glycemic index. (*)

Apart from fiber and protein, edamame is also rich in essential vitamins and other micronutrients such as folate, iron, vitamins K and C, and potassium.

Edamame also has the typical side effects that all legumes can have on some people, which are GI tract issues such as constipation, diarrhea, and stomach cramps.

Another important thing to take into consideration when deciding if edamame is a food you would like to consume is how it is prepared. Generally, boiled and steamed edamame will be healthier, while fried edamame is less healthy. You can add some virgin oil (coconut, olive) onto boiled or steamed edamame for an additional fat boost.

What is the GI of soybeans?

The Glycemic index scale is a relative scale that rates how much a certain food raises blood sugar in comparison to pure glucose. The scale is from 1 to 100 with pure glucose at 100. As mentioned above, soybeans have a low glycemic index (GI) or 20. (*)

Can You Eat Edamame On The Keto Diet?

Edamame contains only 4 grams of net carbs, 5 grams of fiber, and 12 grams of protein for 100 grams serving.

It is a unique soy product that is a great source of whole, plant-based protein, as well as fiber and essential micronutrients. It is also low-carb and is low on the GI scale. This makes edamame even more appealing to consume on a low-carb or keto diet.

However, this tasty soybean appetizer is till a legume, and legumes are typically avoided on a strict keto diet. Even though it is a low-carb legume, it can still take up 4-5 grams of net carbs, which is about 25% of the daily net carb allowance of a strict keto dieter.

Additionally, since it is a legume, edamame can also cause side effects in some people.

To sum everything up, edamame is an immature soybean appetizer that is low-carb and high in protein, but it is still a legume. Therefore it is not strictly ketogenic and you should be avoiding it  if you are following a strict keto diet.

However, if you are not on a strict keto diet and you want to consume edamame, then you can do so, but we recommend that you make sure to watch out on the serving size so you do not consume too many carbs.

How many net carbs does edamame have?

In a serving of 100 grams, edamame contains 4 grams of net carbs.

No, edamame is not strictly keto-friendly as it is a legume. It also takes up 25% of a strict keto dieter’s daily carbs, so it is not the most efficient way to use your carbs.

Edamame is a salty appetizer with an Asian origin. It is the name for immature, cooked (steamed, boiled, or fried) soybeans which are served with salt.

Soybeans are unique legumes, and green soybeans- edamame is even more unique. A large portion of their nutritional value goes to protein, which is whole, plant-based protein, and fiber. Edamame is also low-carb and it has a GI of 20 which is classified as a low GI. Edamame is also rich in many essential micronutrients. 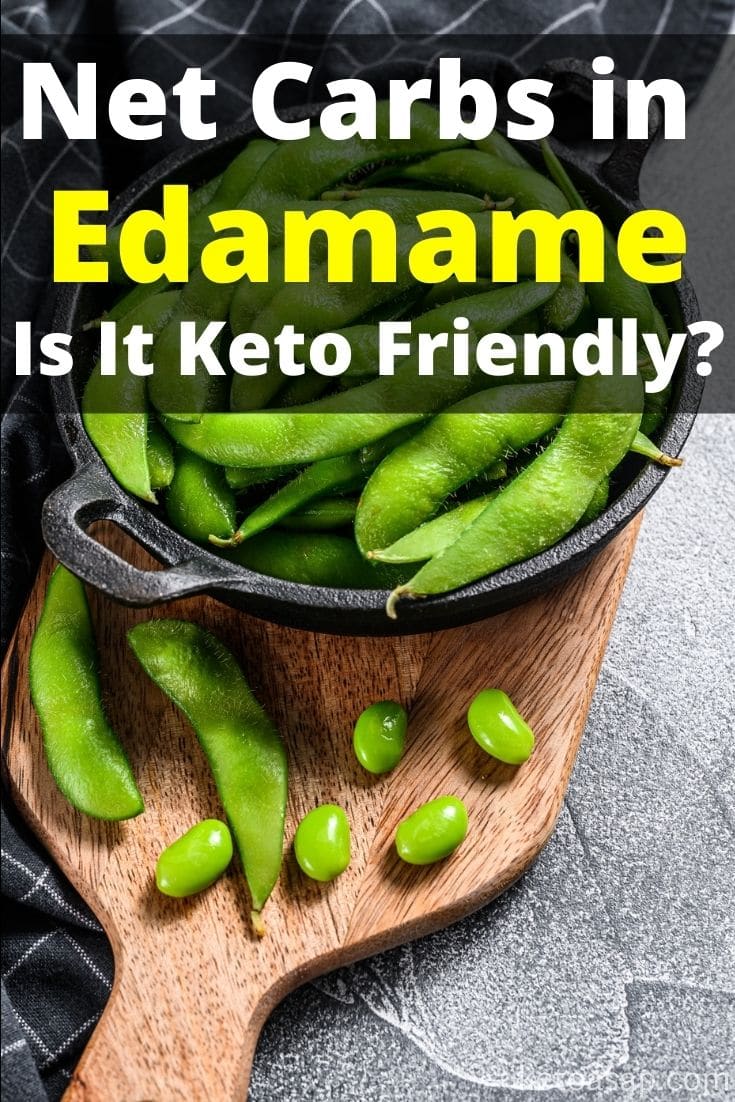