Milk, including whole milk, is a very common drink that is used in a variety of ways. You can add it to recipes and cook with it to make different desserts, cakes, milkshakes, add it to coffee, tea, or drink it by itself. Basically, milk can be added to anything.

That being said, it is understandable why you would want to know about it if you are on a keto diet. Can you consume whole milk on the keto diet or will it kick you out of ketosis? Keep on reading to find out everything you need to know.

What is Whole Milk?

Even though we have all heard about whole milk, many of us don’t know what it actually means.

Whole milk is the milk of a cow that has fat and water content that has not been altered. This does not mean that it comes straight from the cow. It is still pasteurized, homogenized, and often fortified with vitamins such as vitamin A and vitamin D.

In the table below is the nutritional information of one serving or 1 cup (244 grams) of whole milk. (*)

Whole milk is dense in micronutrients such as calcium, vitamin D, vitamin B2, vitamin B12, selenium, phosphorus and potassium. Some manufacturers also add vitamins to enrich the milk.

Milk is commonly known for its calcium content. That’s because calcium is a nutrient that is mostly associated with the formation and metabolism of bones, and along with vitamin D it is crucial to keep our bones strong and healthy. (*)

Also, whole milk is rich in conjugated linoleic acid and omega-3 fatty acids which are linked to many health benefits and have numerous studies done about them. They are known to help with reducing inflammation and aid in metabolic health, reduce risks for type 2 diabetes and coronary heart disease. (*), (*), (*), (*)

Dairy On The Keto Diet

Some dairy products such as cheese and thick yogurts can be a great attrition to a keto diet, as they are a good source of fat and protein and are generally low in carbs.

But when it comes to milk, that may not be the case. The reason is that regular milk contains a sugar called lactose which has a GI(glycemic index) of 46, which falls in the medium range. Lactose is a fermentable sugar and yogurt and most cheeses are made by fermenting milk, where microorganisms are turning lactose into lactic acid. (*), (*)

The lactose in milk can cause a spike in blood sugar which can be of importance for diabetics, and also it might cause digestion problems for those who are lactose intolerant and can experience symptoms such as abdominal pain, nausea, bloating, flatulence and diarrhea beginning 30 minutes to 2 hours after consuming milk. (*)

Can You Drink Milk On Keto Diet?

When we look at the table of nutritional information we can see that just 1 cup or 244 grams of whole milk has about 11.4 grams of net carbs and 146 calories.

Whole milk is rich in fat and sufficient in protein, which is great for a keto diet, however, just one serving can take up more than half of the daily carb limit of a strict keto dieter, which is usually 20 grams or less per day.

And, while lactose does not have the highest GI, it still has a GI of 46, meaning it can still cause blood sugar spikes, just not as rapidly as other sugars and foods. It can still kick you out of ketosis or prevent you from getting into it if you consume too much of it.

Therefore, whole milk unfortunately is not ketogenic and it is NOT recommended for those on a strict keto diet as just one cup takes up 11.4 grams of your daily carbs.

If you are not on a strict keto diet and you are looking to fit whole milk into your daily carb limit, we recommend that you carefully watch how much milk you are using.

While a splash or two of whole milk in your black coffee or tea may not affect your carbs that much, there are different types of milk that you can consume such as coconut milk or almond milk that are lower in carbs and are keto-friendly.

No, whole milk is not strictly keto-friendly, since one cup takes up more than half of the daily carb limit of a strict keto dieter.

How many net carbs does milk have?

How many carbs in a glass of milk?

Yes, milk is relatively low in carbohydrates compared to fruit juice and many soft drinks and energy drinks.

Can you drink milk on a low carb diet?

Yes, you can drink milk on a general low carb diet as long as you’re not lactose intolerant.

Whole milk is a very commonly used liquid, but unfortunately, it is not ketogenic and we recommend that you avoid using it if you are following a strict keto diet as it has 11.4 grams of net carbs per serving and a GI of 46.

Instead, we recommend using keto-friendly milk options, such as almond milk and coconut milk.

If you are on a low carb diet and still want to consume whole milk, then we recommend that you carefully monitor the amount that you consume so that it fits in your daily carb limit.

Up next: Is half and half keto friendly? 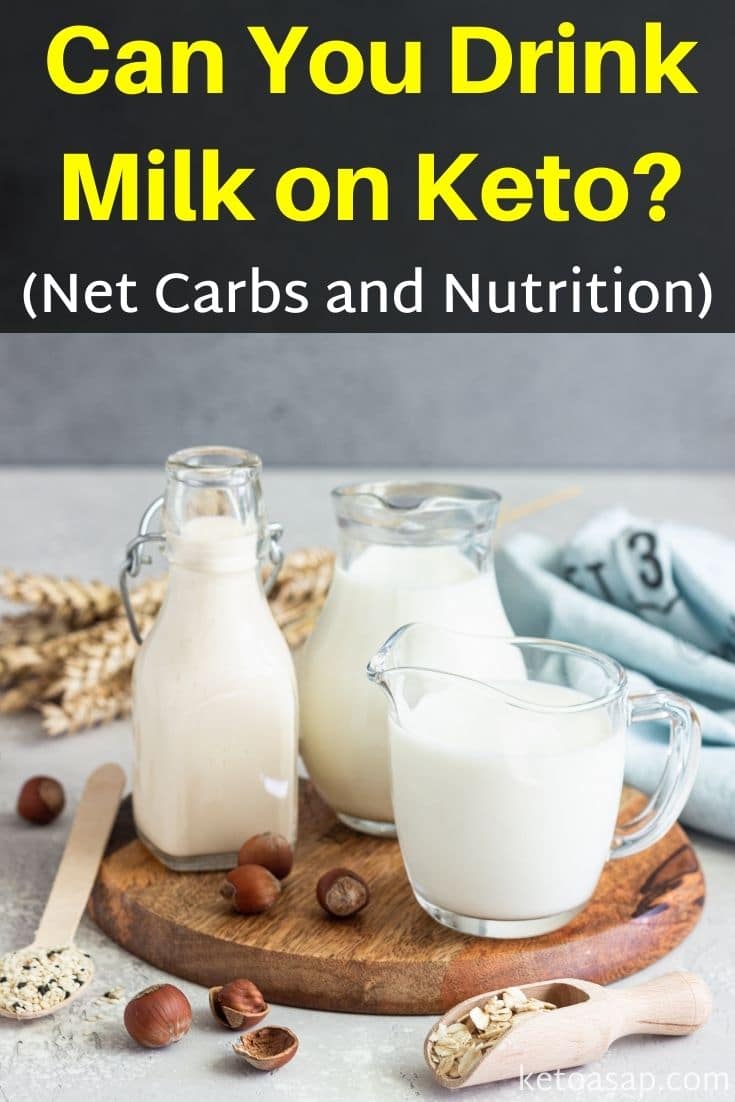