Milk is such a big part of many people’s lives, but when you are on the keto diet regular cow’s milk is not an option. That is because cow’s milk contains lactose or milk sugar which can raise blood sugar levels and prevent you from getting into ketosis if you drink too much.

That’s why many people turn to keto-friendly milk substitutes such as almond milk and coconut milk. But, what is the difference between the two, how to use each one and is one better than the other for the keto diet?

Keep on reading to find out!

What Is Almond Milk?

Almond milk is plant-based milk that is made from almonds. Its flavor is sweet and nutty and it has a creamy texture. Almond milk is widely available in markets and convenience stores, but it is also very easy to make it yourself if you have a blender.

Almond milk is made by soaking the almonds in water overnight or 8 to 48 hours. This will make the almonds soak up some of the liquid and become soft and puffed up.

After soaking, the water is drained and the almonds are put into a blender with fresh water. At this point, flavoring is added such as vanilla extract, and a pinch of salt. Sometimes cocoa powder is added to make it chocolate almond milk, but this is all optional.

Then it is blended for approximately one minute or until all almonds are blended.

Then the almond milk is strained through a gauze and a sift to separate the pulp, so all that is left is the smooth, tasty almond milk. The leftover blended almonds or almond meal can be fully reused to make delicious keto baked pastries or as a bread crumb alternative.

Almonds and almond milk are a great source of vitamin E, and sometimes calcium and vitamin D are added to store-bought almond milk.

What Is Coconut Milk?

Coconut milk is also plant-based milk that is made from the pulp of grated mature coconut. It has an opaque, white color and smooth texture. It also has a consistency that can vary depending on the fat content.

It has a rich, slightly sweet, coconut flavor. Coconut milk is available widely in stores, but it is also very easy to make at home.

What is special about coconut milk fat is that it is a unique form of saturated fat- called medium-chain triglycerides (MCTs), which have many health benefits.

In the table below we have the comparison of nutritional information on 1 cup or 244 grams of almond milk and drinking coconut milk according to USDA.gov. Please note that different brands will have different nutritional values depending on how much water and almond/coconut they use. (*) (*)

Both almond and coconut milk are keto-friendly and can be used in many ketogenic dishes and beverages. But, they still have their differences.

Almond milk is a great source of vitamin E, which is a powerful antioxidant that helps protect and repair our organism from oxidative damage done by free radicals. (*)

Even though it is higher in protein than coconut milk, it is still not a good source of protein. Additionally, store-bought almond milk can contain added artificial flavors, additives and sugar so make sure you read the ingredient list to make sure you are using unsweetened almond milk.

Coconut milk is high in a special type of saturated fat called MCTs or medium-chain triglycerides. MCTs have been related to numerous health benefits such as lowering appetite, enchanting the expenditure of energy, improving insulin sensitivity, lowering blood lipids in cases of type 2 diabetes, and more. (*), (*), (*)

Sometimes extra sugar and other additives are added to coconut milk as well, so make sure you use an unsweetened one to avoid extra carbs.

How to Use Coconut Milk vs Almond Milk

Since milk isn’t keto, both coconut and almond milk can be used in many different beverages and dishes, as well as baked goods in the place of regular dairy milk.

Almond milk goes exceptionally well with just plain, black coffee, or for those that like a little more into their coffee we have our Vanilla Almond Milk Coffee that is ketogenic and completely sugar-free.

When it comes to baking with almond milk, it might be a little tricky, as baking requires great accuracy. If the recipe has been tried with almond milk before, you shouldn’t have any problems, but if it hasn’t been tried with it, then there is a chance that the baked goods might come out a little dry and with a more dense texture or they may not raise as much as they would with dairy milk.

Regarding the taste, it can go well with some foods, but it can be hard to mask if you don’t like it.

Coconut milk is also one of the most widely used dairy milk alternatives that go well in beverages, pastries, and other dishes. Coconut milk can vary in creaminess and thickness, depending on its fat content, but it is almost always thicker than almond milk.

That’s why it is used when you want to cook something smooth and creamy. For those kinds of food, it is most suitable to use coconut milk, but almond milk is also a good option if that’s what you have on hand.

For a delicious lunch idea that everyone will love, check out our Creamy and Cheesy Baked Turkey Breast, which can be made with both coconut and almond milk.

The substitution of almond milk with coconut milk and reversed is also in a 1:1 ratio.

Coconut milk gives a slightly sweet, coconut flavor to the food it is added to, so it might be hard to mask if it doesn’t go well with that particular food.

Both almond and coconut milk are keto-friendly and both have a place in a keto dieters’ kitchen. It is ultimately up to you which one you are going to use. In the table below we have the summary of both kinds of milk so you can decide easier!

How to substitute dairy milk with coconut milk?

To replace dairy milk with coconut milk, use a 1:1 ratio.

How to substitute dairy milk with almond milk?

To replace dairy milk with almond milk, use a 1:1 ratio.

How many net carbs does one cup of coconut milk have?

One cup of coconut milk contains 7.12  grams of net carbs

Both coconut milk and almond milk are a great way to add that creaminess that dairy milk offers, but without the unnecessary carb it contains. Both are keto-friendly and both are delicious, it is up to you which one you use, or you can even use both!

Up next: Almond flour vs Coconut flour 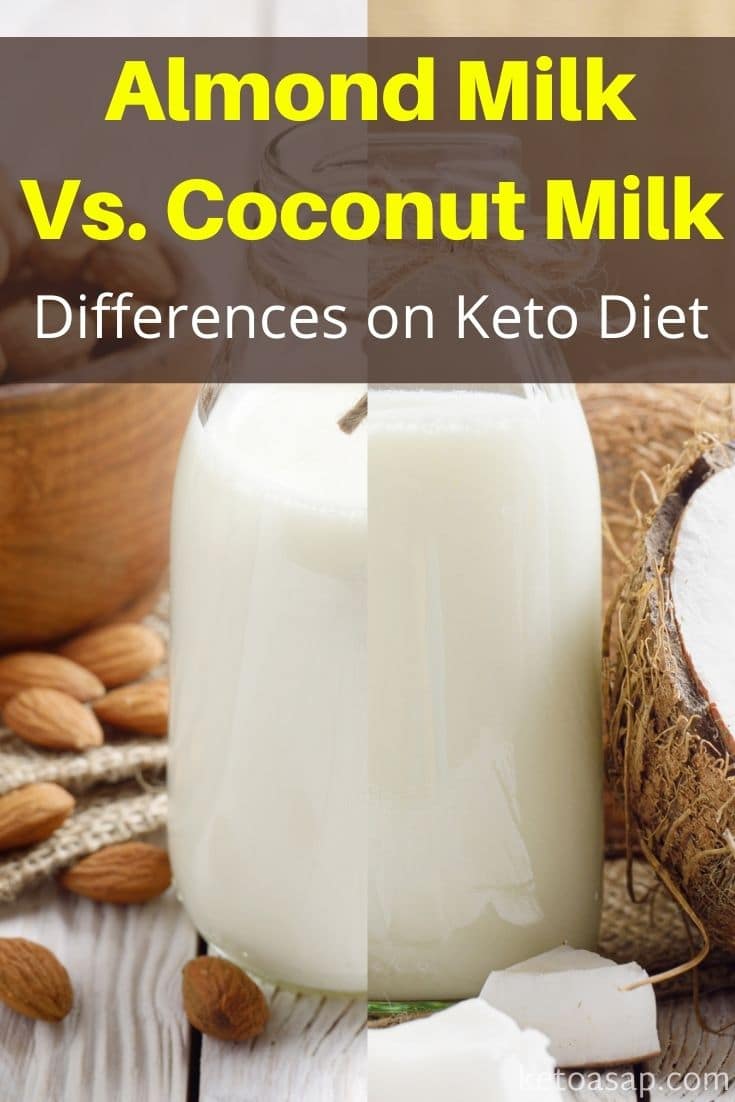