Almond butter and peanut butter are a general favorite among many, and the keto community is no exception. You may have noticed that both of these kinds of butter are often used in many keto recipes, snack ideas, smoothies, and meals.

Understandably, you may be wondering why? What are they? Which one is used when and what is the difference between the two? Is one healthier than the other?

To find out all the answers, keep on reading!

What Is Almond Butter?

Almond butter is a product made with almonds that are ground into a paste-like consistency. Before grinding, the almonds can either be roasted or raw. It is one of the easiest nut butters to make at home if you own a food processor.

Almonds are tree nuts, and they are known to have a lot of beneficial nutrients such as vitamin E, magnesium, fiber, iron, copper, polyunsaturated fats- omega 6 fatty acids, as well as dietary protein. (*)

Almond butter has many uses. It can be used as a spread, as a dip with crackers, as well as in smoothies or desserts, and even in savory dishes for an additional nutty flavor. The possibilities are endless.

Almond butter is also a great option for those who are allergic to peanut butter or other types of butter.

What Is Peanut Butter?

Peanut butter is one of the most popular kinds of nut butter across the globe. It is made by grinding dry-roasted peanuts into a paste or a spread. In store-bought peanut butter, there are often added other ingredients such as salt, sweeteners, emulsifiers, vegetable oil, etc.

In the process of making peanut butter, the peanuts are shelled, then roasted at large quantities in high temperature- 800 °F or 430 °C. Then they are left to cool until they are at a temperature of 86 °F or 30 °C.

After they cool the peanuts undergo blanching- either heat blanching or water balancing to remove any remaining seed coating. Then the seeds are ground through two grounders until they are smooth like butter. At this point in the process, the additives are added, such as salt, sweeteners, and vegetable oil stabilizer. Then the peanut butter is ready to be packaged.

The only way to control what goes inside your peanut butter, as well as its texture, is to make it yourself, which is also very easy to do.

Peanut butter is rich in dietary fiber, pantothenic acid, niacin, vitamin E, and vitamin B6, as well as dietary protein. (*)

Both almond butter and peanut butter are very nutritious, but what are their nutritional facts? In the table below, we have compared the nutritional profile of 100 grams of each butter. (*) (*)

Both almond butter and peanut butter are widely used among keto dieters. So, what is the difference between the two? When to use which and how do you use them? What is different in each of their nutritional profiles? The section below has the answers.

When you analyze the table of the nutritional information you can see that they do not have a large gap when it comes to calories. However, the peanut butter contains slightly more protein at 22.5 grams, in comparison to the almond butter- 21 grams per 100 grams.

Regarding the net carbs, almond butter contains significantly less- standing at 8.5 grams, vs peanut butter at 17.5 grams per 100 grams.

Almond butter has many health benefits that come from the nutrients in almonds. Almonds contain polyunsaturated fats- omega 6 fatty acids, as well as magnesium, iron, copper, as well as vitamin E.

The vitamin E in almonds is connected to lowering the risk of developing several chronic conditions such as Alzheimer’s and cardiovascular disease in both men and women. (*), (*), (*), (*)

Iron, which almonds are rich in, is an essential mineral that is incorporated into red blood cells and it helps bring oxygen to organs and tissues. It is especially important to consume iron for pregnant women, children, and toddlers, people who have anemia or are prone to it. (*)

Peanut butter is made from peanuts, which are rich in proteins, fibers, polyphenols, antioxidants, vitamins, and minerals.

One of the most recent discoveries about peanuts is that they contain and are an excellent source of phenolic acids, flavonoids, resveratrol, and phytosterols, which can prevent the absorption of cholesterol. (*)

They also contain forms of heart-friendly fats and good amounts of protein- more than any other nut, which is why they are great for the keto diet.

The downside of peanut butter is that most market-bought peanut butter contains additives such as sweeteners, stabilizers, and emulsifiers, as well as the loss of nutrients during the processing.

How to Use Almond and Peanut Butter

When you compare the taste of both kinds of butter, peanut butter has a nutty, sweet, and salty taste that is accompanied by a slightly earthy taste. Almond butter has a similar, slightly sweet taste, but it has nuttier and richer notes.

Since both kinds of butter have more similarities than differences, you can use them interchangeably in most recipes. Therefore 1 tablespoon of peanut butter equals 1 tablespoon of almond butter.

This is especially easy to do if the textures are the same. Usually, all store-bought almond butter is smooth, while you can find different ranges of smoothness of store-bought peanut butter.

The other thing to look out for is if the butter in the recipe is salted or unsalted and use it accordingly.

Here are some sugar-free keto recipes with almond and peanut butter you can try:

Both peanut butter and almond butter are keto-friendly, they are used in many keto recipes, so both are great additions to a keto diet. It is entirely up to you which one you prefer to use. To see the differences, we have prepared a summary of the overall differences between the two in the table below.

How many net carbs does almond butter have?

One tablespoon or 16 grams of almond butter has 1.5 grams of net carbs.

How many net carbs does peanut butter have?

One tablespoon or 16 grams of peanut butter has 3 grams of net carbs.

How to substitute peanut butter with almond butter?

You can substitute one for the other at a 1:1 ratio. Make sure that the textures are similar and keep track of whether you are using salted or unsalted butter.

Both of these nut butters are ketogenic and are used in many keto recipes, snacks, and meals. They are a great way to add additional fat and protein to help you with your ketosis. Many store-bought sugar-free desserts also use these types of butter as their main ingredients.

They have more similarities than differences- they taste alike, they have the same amount of calories, and they can be substituted easily and effectively. The biggest difference is the net carbs, which peanut butter contains almost half as much as almond butter. However, almond butter is more expensive, and peanut butter is cheaper.

Ultimately, it all depends on what you prefer, or what you can use in case of a peanut allergy. With careful planning, you can make both kinds of nut butter a part of your keto journey!

Up next: Coconut flour vs almond flour 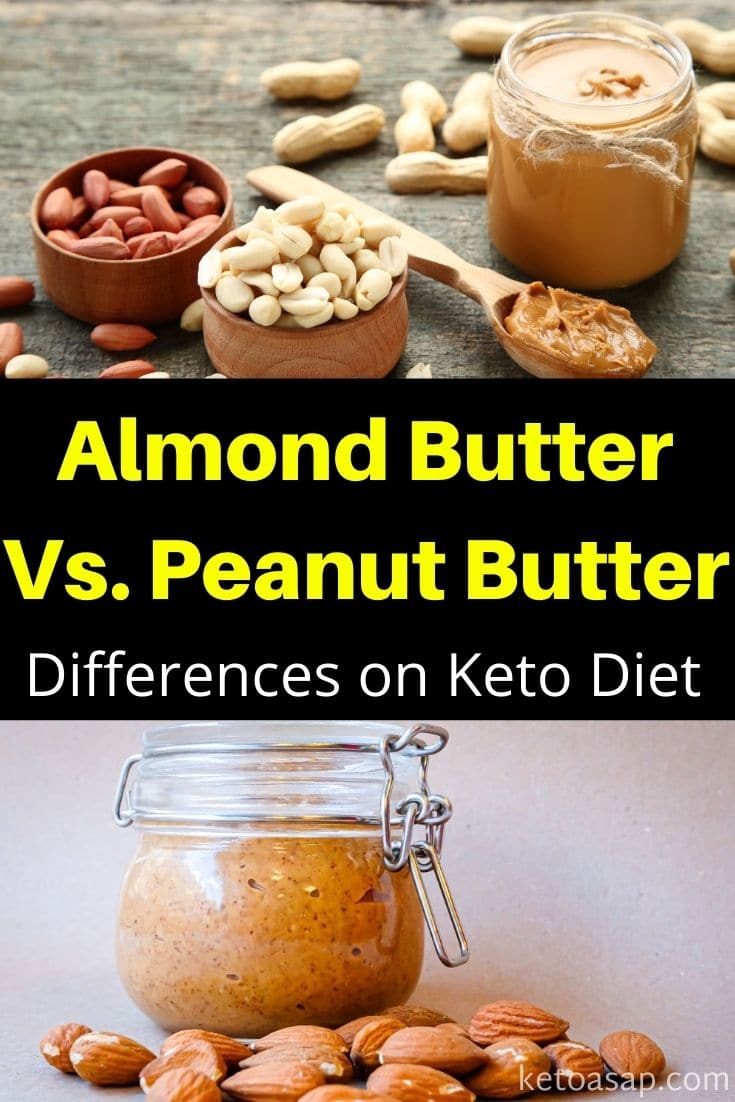