Bread is something that every culture and cuisine has. It is a part of the daily life of many people. When people hear about the keto diet or a low-carb diet, giving up bread is the first thing that they think about and to some, that may come as a shock.

However, with today’s resources and possibilities, low-carb bread and even zero-carb bread are not just a dream, but now they have become a reality as some brands have released keto-friendly and low-carb bread.

You can find many carb-free bread, no-carb bread, zero net carb bread and flourless bread products at your local stores such as Aldi, Walmart, Sam’s Club, Costco and even online stores such as Amazon.

But, can you eat low-carb and zero-carb bread on the strict keto diet? Read the list of zero-carb and low-carb brands to find out more about them.

The L’Oven Fresh Zero Carb Bread (Wheat or Multiseed) at Aldi is a very popular keto bread. Each serving of 1 slice (or 28 grams) has 40 calories, 5 grams protein, 1 gram fat, 9 grams total carbs and 9 grams fiber, which makes it 0 net carbs.

The ThinSlim Zero Net Carb Bread is one of the most popular bread brands because of its extremely lowest amount of carbs, as all its carb content is just fiber. This makes the bread a little tougher than your normal bread, but keeping in mind that it is a zero net carb bread, it might be worth it.

The ThinSlim zero net carb bread has five different types of bread and those are Plain, Cinnamon, Rye, Everything, and Honey.

In the table below is the nutritional information of 1 serving or 1 slice of ThinSlim Zero Net Carb Bread.

The ingredients of the ThinSlim Low-Carb, zero net carb bread line are the same as their plain bread, but with added ingredients to create the different tastes.

When analyzing the ingredients, you may notice that there are Wheat Protein Isolate, Vital Wheat Gluten, and  Modified Wheat Starch.

But what are they? Modified Wheat Starch is a carbohydrate that has been artificially modified physically, enzymatically, or chemically in order to enhance or diminish some of its attributes. Modified starches are not keto-friendly and should be avoided on the keto diet. (*)

Wheat Protein Isolate and Vital Wheat Gluten are the main ingredients in ThinSlim low-carb bread. They are proteins that are isolated from wheat and separated from the starch.

Even though they are starch-free, they are gluten, and while some keto and low-carb dieters do not avoid gluten completely, others strive to exclude it from their diet, so if you are avoiding gluten keep this in mind.

To sum it all up, ThinSlim Zero Net Carb bread is not strictly keto-friendly as it contains modified wheat starch. But, if you are someone who is on a low-carb diet and just wants bread that will not be as high in net carbs as “normal” bread, then you can consume it.

SoLo Carb Bread is one of the most popular low-carb bread brands because of its taste that is close to how “normal” bread tastes.

The bread is baked in a small shop in Wisconsin. It has a soft and airy texture and one slice weighs about 20 grams, which if you compare it to normal bread, it is a little less. Grilling low-carb bread can make it really fall apart, but Solo Carb Bread can be grilled and also frozen and then grilled and it still tastes good.

SoLo Carb Bread has 3 flavors of their bread and those are Country White, Harvest Wheat, Artisan Rye.

Here is the nutritional information of 1 slice or 20g of the SoLo Carb Bread line.

Can you eat SoLo Carb Bread on the keto diet?

SoLo Carb Bread has many ingredients that are not considered keto. While their bread is all-natural and with no preservatives, things like wheat flour, oat bran, wheat bran, canola oil, and vegetable glycerin are not ketogenic.

Vegetable glycerin is a sugar alcohol that is made from coconut oil, soybeans, or palm oil. It is used in many products such as soaps and gels, as well as a sweetener and it also can cause water retention. And 1 gram of vegetable glycerin is an equivalent of 1 gram of carbs, so it is not keto-friendly, although consuming traces of it will likely not kick you out of ketosis. (*)

So, SoLo Carb Bread technically is not ketogenic, so if you are on a strict keto diet you may want to avoid it. But, if you are on a low-carb diet and you want to eat low-carb bread that resembles “normal” bread, then 3 net carbs per slice may be worth it.

Chompies Low Carb Multigrain Bread is a low-carb bread that is high in protein and high in fiber and kosher. Its texture and taste resemble “regular” whole grain bread. It can be kept frozen and it is even advisable since it doesn’t have preservatives.

Here is the nutritional information on 1 slice or 28 grams of Chompies Low-Carb Multigrain bread.

Can you eat Chompies Low Carb Multigrain Bread on the keto diet?

Again, while the net carbs are very low at 1 gram per slice, many of the ingredients Chompies Low Carb Multigrain bread contains are not keto-friendly. Things like unbleached whole wheat flour, soybean oil, and cultured wheat are avoided on the keto diet.

So, if you are doing strict keto, then you should avoid this bread, but if you are doing a low-carb diet or you are just looking if the macros fit -then a slice of bread that contains 1 gram of net carbs could be a great addition to your diet.

Mikey’s Grain-Free Sliced Bread is a certified grain-free, gluten-free, soy-free, dairy-free, non-GMO, kosher, certified paleo. It is made with only 11 ingredients and it is packed with protein that comes from egg whites and almond flour.

One slice of Mikey’s bread is almost twice the weight of a regular slice- 46 grams for one serving. The bread is shipped frozen, and it can be frozen again and defrosted in the refrigerator, as well as toasted until golden brown.

This is the nutritional information of 1 slice or 46 grams of Mikey’s Grain-Free Sliced Bread.

The main ingredients in this bread are eggs and almond flour, and the only ingredients that are not keto-friendly in Mikey’s bread are the tapioca starch and the honey.

Tapioca starch is a starch derived from the roots of the cassava plant. It is mainly used as a thickener, sometimes it is used as flour and even desserts. Since it is a starch, it is high in carbs and therefore not ketogenic.

Regarding honey, almost all of its calories come from carbs and all of its carbs are net carbs as it has 0 fiber. So, it is definitely not ketogenic.

The good news is that both tapioca starch and honey are lower on the ingredient list, which means that they are not contained at large amounts- that’s probably why it only has 4 grams of net carbs per slice which weighs 46 grams- double the weight of normal bread.

Technically, Mikey’s Grain-Free Sliced Bread is not ketogenic, but if you do not mind small amounts of non-ketogenic foods then you can consume it.

Because of the lack of flour and the coconut content, this bread is not as airy and light as the other bread, but it has a thick texture and higher weight when compared to normal bread. The coconut it contains gives it a slightly sweet flavor.

It is shipped frozen and it should be kept refrigerated.

Here is the nutritional information on 1 slice or 31 grams of Liberated Coconut Flourless Bread.

Can you eat Liberated Coconut Flourless Bread on the keto diet?

The ingredients of this bread brand are keto-friendly and organic, plus it is dairy-free for those who have issues with dairy.

It has 3.5 grams of net carbs per slice which is 31 grams and slightly heavier than the normal slice of bread as it is mainly egg and coconut. With mindful consumption, it can be a great addition to your keto diet.

Mostly no, even though some products have 0 net carbs, it still contains modified wheat starch, and other non-keto ingredients which is not strictly ketogenic. However, you can still eat it if you’re just following a general low-carb diet.

How To Make Keto Breads At Home

Here are some keto-friendly bread recipes using keto-approved ingredients that you can follow:

Most store-bought low-carb and keto bread is not keto-friendly because they might have some ingredients that aren’t as keto-friendly as advertised.

And even though there are some options of store-bought keto bread out there, there is also the option to make it yourself- where you can control what you consume. 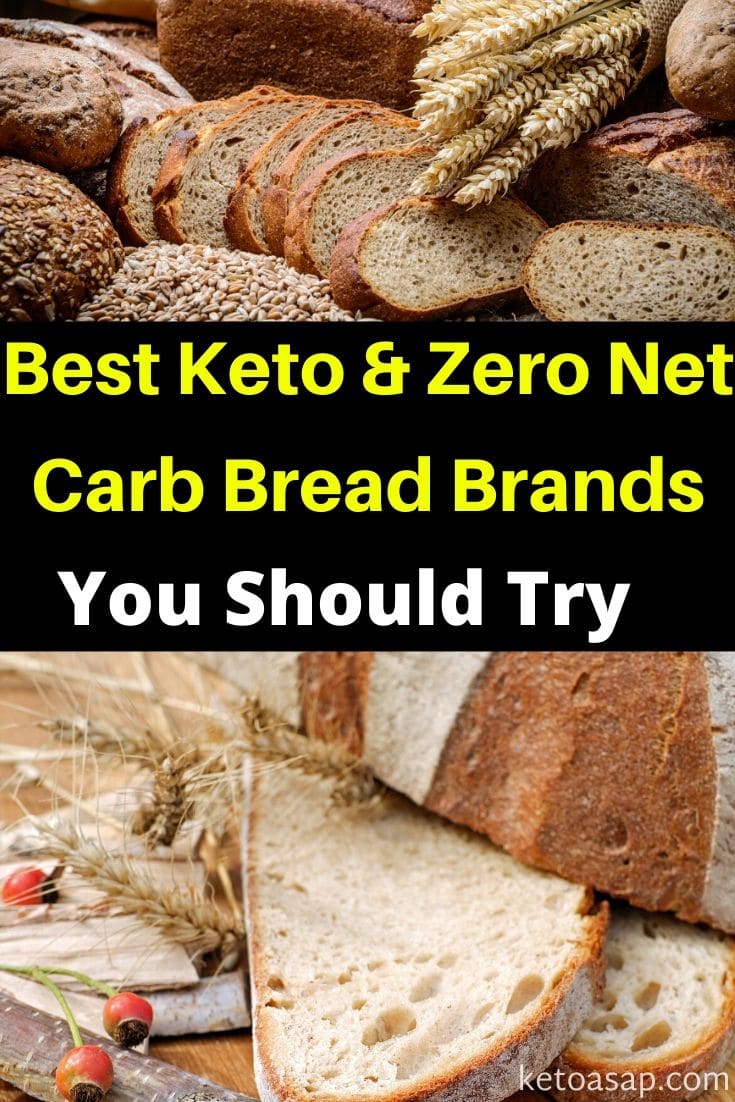