For many years pickles have been a staple food in kitchens all over the world and a favorite snack for many. They are a great way to add some crunch, spice, and sourness to dishes like burgers, fish, salads and they can also be incorporated in different sauces and dips.

Pickles are also a great snacking food, since they taste amazing, but have very little calories. They are known to be a great option for those who are trying to shed some pounds.

If you are following the keto diet or are considering it, and you love some tasty pickles, you are probably curious if you can enjoy them while still staying in ketosis. Keep on reading to find out everything you need to know.

Pickled cucumbers or often called pickles in Canada and America. gherkin in Australia, Britain, Ireland, South Africa, and New Zealand, are preserved cucumbers that are pickled in vinegar, saltwater brine, or other acidic solution and have been left in it over a period of time.

The preservation is achieved either by souring the cucumbers by Lacto-fermentation or by immersing them in an acidic solution such as vinegar.

Both are processes that have been used for many years to preserve food, but what is the difference?

Pickling is done by immersing the cucumbers or other vegetables in an acidic solution such as vinegar. The solution changes the taste and texture of the vegetable or cucumber. The process of pickling involves the use of heat in order to destroy the growth of any microorganisms. (*)

To pickle the vegetables faster and easier, the vinegar, with added sugar, salt and sometimes spices and herbs are brought to a boil, and then the solution is poured over the vegetables and left for a short period of time.

Fermentation is a process of preserving food that is achieved by the bacteria that are already in it. When the bacteria find themselves in anaerobic conditions (deprived of air), they can inhibit the growth of other microorganisms. During this process, the natural bacteria create acid that preserves the food. (*)

Fermentation doesn’t require heat or an acidic liquid. It can be done with just salt and a container. In comparison to pickling with an acidic solution, the process of fermentation takes longer and it changes the color, texture, and flavor of the food that is fermented.

Lacto-fermentation is a process of fermentation brought on by the presence of bacteria called lactobacillus. They give the specific sour and tangy taste and create probiotics in the food.

Here are the nutritional facts of 100g of pickles. (*)

Can You Eat Pickles On The Keto Diet?

In the ketogenic diet community, pickles have become a quite debatable topic, so the answer to this question is a little complicated and it varies from brand to brand.

That is because there are split opinions about them in the keto diet community. One group thinks they are an amazing ketogenic snack option, and others don’t agree with that and have a theory that pickles can throw you off ketosis. But, really, it depends on the brand and how much you eat.

As we said before, one side is okay with consuming pickles and their argument is that pickles are a great low calorie, low-carb snack option, and also, they have many health benefits. (*)

So, why do some people think that they aren’t ketogenic?

The counterargument is that in the process of making pickles, some manufacturers add sugar and artificial sweetener in the preservation process, and that can really throw you off ketosis.

What you need to consider

Pickles are a great ketogenic option that is low-calorie with just 11 calories and extremely low-carb with just 1.06 grams of net carbs per 100 grams. They are a great food to snack on and a great option if you want to add crunchiness and sourness to any meal.

Generally speaking, pickles are ketogenic and you can incorporate them in your keto diet, but ultimately it depends on the manufacturer and what process they used in making them.

To get the pickles with the lowest amount of carbs possible, Lacto-fermented pickles are probably the better option because sugar is not added in the process of making them. They also have bacterial cultures- probiotics that help with digestive health.

Fermented pickles can be found in the refrigerators section in grocery stores because in order to preserve the probiotics they need to be kept cool, and “regular” pickles are not refrigerated.

The best way and only way to avoid any added sugar in your pickles and ensure that the pickles you eat have the minimal amount of carbs is to make them yourself.

Pickle juice on the keto diet

Pickle juice is very popular among keto dieters. This is because it is rich in minerals and electrolytes, which is known to help with the symptoms of the “keto flu”, and it can even help you completely avoid it.

What Are Fermented Cucumbers Good For?

Fermented foods, including pickled cucumbers, are great for gut health. The probiotics that they contain help balance the gut flora (the microorganisms in your gut) and keep it healthy and functioning well. (*)

Implementing fermented foods, which are rich in vitamins B and vitamin K2, can help improve other aspects of your health such as your skin, your sensitivity to insulin and improve your inflammatory response. (*)

Pickles also tend to have high sodium levels which most people would avoid, but for keto dieters, high sodium is recommended because it can help with the “flu-like” symptoms some may experience.

Pickles are low-carb and low-calorie, so they are a great ketogenic option, as long as you make sure they do not have any added sugars in the process of making them.

How many net carbs do pickles have?

While being on the keto diet means that you will have to give up many things that you enjoyed before starting it, pickles are not in that category.

Pickles can be a great low-calorie and low-carb option for you to snack on without the calories and also to add a little crunch to your meals. 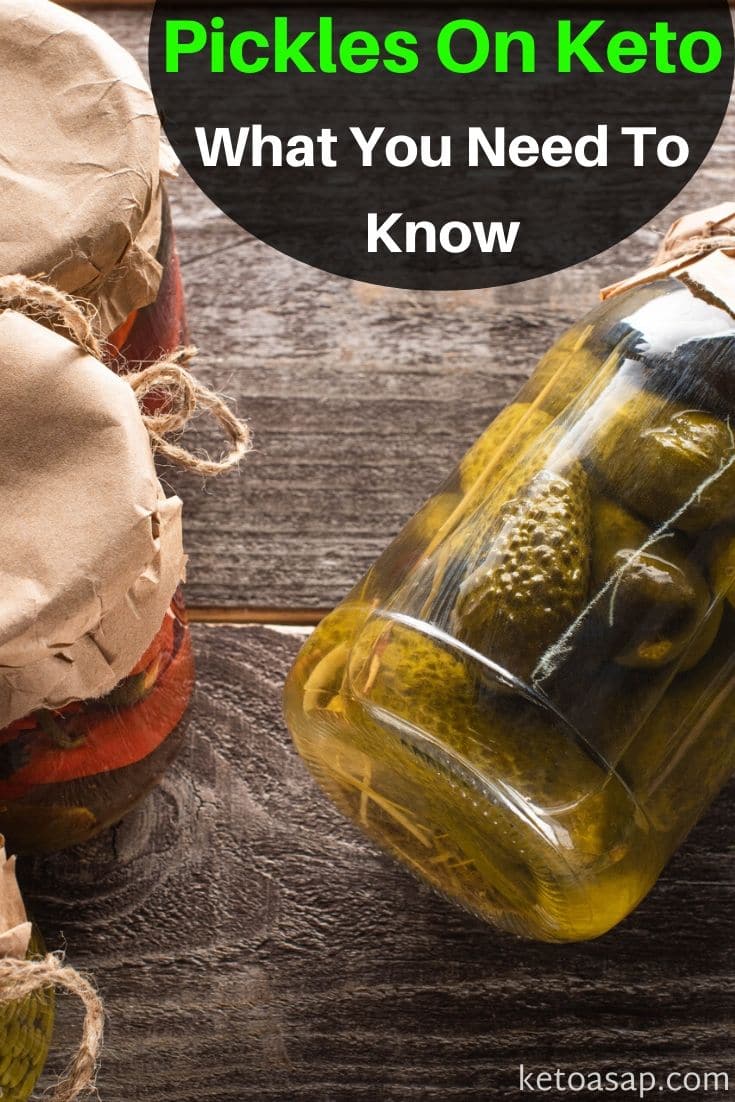