Coconut oil is one of the most commonly used oils by the keto community, and MCT oil or medium-chain triglycerides oil is getting popular. But, it is a well-known fact that coconut oil contains MCTs.

So, are they the same or different? How are they used and should you even be using them? Keep on reading to find out!

What Is MCT Oil?

MCT oil is a supplement that contains medium-length chains of a type of saturated fats called triglycerides. Because of their shorter length, these kinds of fats are easier to digest than fats with longer chains and they also have some beneficial health effects.

This makes the MCTs digest easier than LCTs- they don’t need the enzymes and bile that LCTs do in order to get absorbed into the bloodstream, they are absorbed intact.

The most common source out of which MCTs are extracted is coconut oil or palm kernel oil.

How do MCTs work?

When MCTs are absorbed into the bloodstream they go straight to the liver. The liver rapidly metabolizes them and uses them for energy or it can turn them into ketones.

Ketones are produced by the liver when large quantities of fats are broken down. They are compounds that your body and brain can use for energy instead of glucose. This is the basis of the keto diet- the production of ketones by limiting the carb intake.

That’s why MCT oil is getting popular among keto dieters- it can help in the process of ketosis and the production of ketones.

MCTs are present in both coconut oil and MCT oil. But, what do MCTs do apart from creating ketones and how do they help you lose weight?

Some research shows that MCTs can help with lowering appetite and portion control in overweight men by increasing two hormones that promote the feeling of fullness- peptide YY and leptin. It also showed lower levels of triglycerides and glucose in the blood (*)

Another study showed that consuming coconut oil or MCT oil has a ketogenic effect shortly after consumption while keeping blood glucose levels stable. There was also research done that concludes MCTs are beneficial to gut microbiota in obese individuals. (*), (*)

MCTs are also used for fast energy by the cells and are included in cell metabolism. This is because they can enter cells without the need to be broken down as LCTs do. (*)

Some studies show that MCTs and the keto diet have a positive impact on patients with Alzheimer’s disease, epilepsy, and autism. (*), (*), (*)

What Is Coconut Oil?

Coconut oil or copra oil is the oil extracted from the meat of mature coconuts. There are a few different ways to separate the oil from the fiber and protein, including the refined and unrefined methods.

Coconut oil is high in saturated fat, out of which about 50% to 65% are MCTs. However, it also contains LCTs.

The type of MCTs in coconut oil is lauric acid (C12), meaning it is the medium-chain fatty acid with the most carbon atoms, which means it is harder to digest than caprylic acid (C8) and capric acid (C10). Lauric acid is known to have antimicrobial properties (*)

What Is The Difference Between Coconut Oil and MCT Oil?

The main difference between the two oils is that MCT oil contains only MCTs, while coconut oil is a mixture of both saturated and unsaturated fat.

The MCT oil will most likely give you better results simply because it has hand-picked ingredients- mostly capric (C6), caprylic acid (C8) and capric acid (C10) which have the highest chance of turning straight into ketones because of their shorter chains.

Lauric acid (C12), which has a longer chain, is converted into ketones only if the body has very low glucose levels, which means that you need to be on strict keto to see results.

People use MCT oil mostly for its ketogenic benefits. You can put it into your morning coffee or drizzle it in your salad, dessert, snack and smoothie recipes. Having virtually no taste or smell makes this oil very versatile, so you can use it in anything you like- both sweet or savory.

How much MCT oil to use? If it is your first time trying MCT oil, it is best to keep it at 1 teaspoon per day, but you can slowly work towards 1 tablespoon a day. If you are used to it, then 2 tablespoons is the recommendation.

Coconut oil is extremely popular far beyond the keto community. It is stable at high temperatures, so frying and baking with it are convenient. It goes exceptionally well with sweet foods that complement the slight coconut flavor.

Both of these oils are keto-friendly and they both contain MCTs which help the process of ketosis. Coconut oil contains 50% to 65% MCTs. However, if you want an oil that contains 100% MCTs, then MCT oil might be a better choice for you. Different brands have different types of MCTs, and it is up to you to choose which one works best for you.

MCTs are unique, healthy saturated fats that can be easily digested and turned into energy or ketones.

How much MCT oil should I use?

One teaspoon if you are a beginner, but you can work up to 2 tablespoons per day over time.

Is MCT oil and coconut oil the same?

No, MCT oil is just the extracted MCTs from other oils such as coconut oil or palm oil whereas coconut oil contains 50% to 65% MCTs.

Both MCT oil and coconut oil contain MCTs but in different amounts and kinds.

If you want to use oil to boost your ketosis and energy, then MCT oil is the better choice for you since it is made only with MCTs.

If you want to use a healthy oil for cooking that have some ketogenic effects then simply use coconut oil in your meals. The choice is ultimately up to you!

Up next: Best MCT oil for keto diet 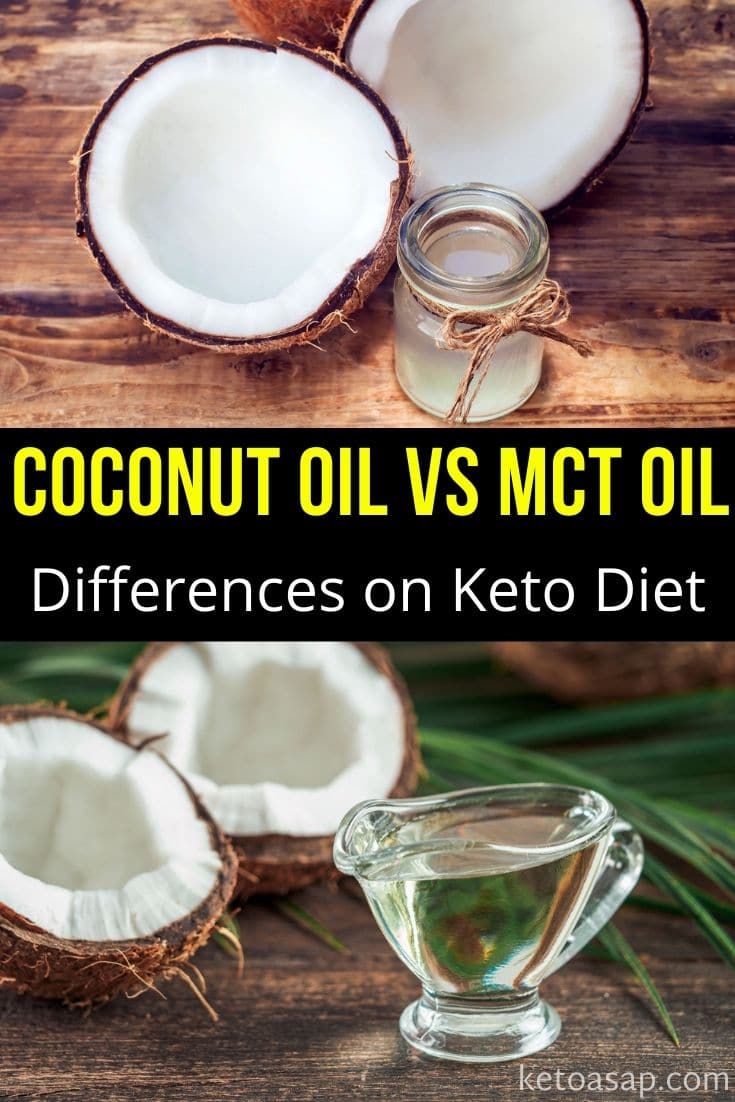