If you are on the keto diet, you most likely know that dairy milk is not ketogenic and is not recommended for a low-carb or keto diet. This is because it contains a type of sugar called lactose which can throw you out of ketosis.

You may notice that soy milk is a dairy milk substitute that is very popular. However, soy milk and other soy products are very controversial when it comes to the keto and low carb diet.

So, understandably, you may be confused and may be wondering if you can drink it if you are on a low-carb or keto diet. To find out everything you need to know, keep on reading.

What Is Soy Milk?

Soy milk or soya milk is a plant-based beverage that is made from soybeans and water. It has a cream color, a slightly sweet taste, and a creamy consistency. The mixture is a stable emulsion of protein, oil, and water, which traditionally, is a byproduct of tofu production with origins in East Asia.

It became popular in North America and Europe in the second half of the 20th century. Especially when production techniques were advancing more and more. Manufacturers started to produce soy milk that had the taste and consistency similar to dairy milk.

Today, people from many communities use it on the daily. Some brands may add additives, preservatives, and sweeteners to prolong shelf life and taste, so if you want to control what is in it you can make it yourself.

How to make soy milk?

There are many recipes on how to make it at home, but most are a variation of the following process.

To make it, you need to soak organic, non-GMO soybeans in filtered water overnight to soften. Then the mixture is put in a blender to grind. After grinding, you need to boil the mixture for 3 to 6 minutes and frequently stir to avoid burning. You will know when it is done when it creates a foam that rises.

After boiling, you are going to strain the mixture through a cheesecloth or gauze to separate the milk from the ground up soybeans. Then you are going to bring the drained liquid to a slight simmer again for a few minutes and then let it chill. You can also add a pinch of salt, some vanilla seeds, or vanilla extract for additional flavor.

Soy milk, along with other soy products, is very controversial in the health and diet communities. There is a lot of research that shows mixed results regarding the consumption of these products which leaves scientists with divided opinions.

It is a great source of potassium and many times manufacturers fortify the milk with vitamins A, B 12, and vitamin D, as well as with calcium.

Soybeans also contain isoflavones. One study shows that soy isoflavones may help reduce blood pressure in individuals with high blood pressure 3 to 6 mmHg. Research also shows that they may lower the risk of dying from heart disease by up to 15%, as well as lowering the risk for gastric, colorectal, and lung cancers. (*) (*)

Another study on the same chemicals shows that it may help to lower insulin resistance and blood sugar levels in menopausing women. (*)

However, the results on the blood sugar-lowering effects of soy are inconclusive as some studies show no link between consuming it and its products and lowering blood sugar in healthy people and those with diabetes type 2. (*) (*) (*)

There is even more inconclusive research. For example, one study showed that women who were undergoing fertility treatments and consumed soy isoflavones had 1.3 to 1.8 more chances to give birth, but that was not the case in a study done on men. (*) (*)

However, another study shows that a high intake of it may result in the reduction of ovarian function and fertility. (*)

Additionally, soy and its products contain antinutrients that may lower the ability to absorb vitamins, minerals, and other nutrients properly. Some ways to reduce the antinutrients in soy are to sprout, ferment and cook them. (*) (*) (*) (*)

Also, another concerning issue is that a large percentage of soy is genetically modified.

Can You Have Soy Milk On The Keto Diet?

Just by looking at the nutritional information, you can see that just one cup of it is almost half of a strict keto dieters’ daily carb allowance. This does not make it impossible to incorporate into it, as you don’t often consume a whole cup of it, however, it makes it significantly harder.

Apart from the macronutrients, soy belongs to the species of legumes, and they are not keto-friendly. Additionally, there is no conclusive information when it comes to research on soy and its products there are some studies that show its benefits, but there is some research that shows the opposite.

Also, most of the soy that is produced today is genetically modified, which is not recommended for consumption on the keto diet or a low carb diet.

Overall, soy milk is not strictly ketogenic, as it is made from a legume, has half of the daily carb allowance of a strict keto dieter in one cup, and research shows mixed results about its health benefits. It is important to mention that consuming it and its products in moderation will probably not cause any health problems.

The best keto milk you can have is almond milk and coconut milk.

If you are using store-bought soy milk, make sure you are buying the unsweetened type and that you carefully read the label for any artificial additives and flavorings. If you like to control what goes into your diet, you can make it easily at home.

See more: Can you eat tofu on keto?

How many net carbs does soy milk have?

No, it is not strictly keto-friendly as it is made from a legume.

Soy milk is plant-based milk made from soybeans. It originates from East Asia, but today it is one of the favorite non-dairy milk all around the globe. It has a slightly sweet taste, a tan color, and a creamy consistency which makes it perfect for your coffee.

Unfortunately, it is not strictly ketogenic as it is made from a legume, and researchers and scientists have gotten many mixed results regarding its health effects.

While it is likely that small amounts of soy products will not have any harmful effects, the lack of conclusive information means that they are not recommended for a strict keto diet.

Ultimately, it is your choice, so if you want to consume it you can. However, make sure you always choose the unsweetened type and you always read the label for any non-ketogenic ingredients. 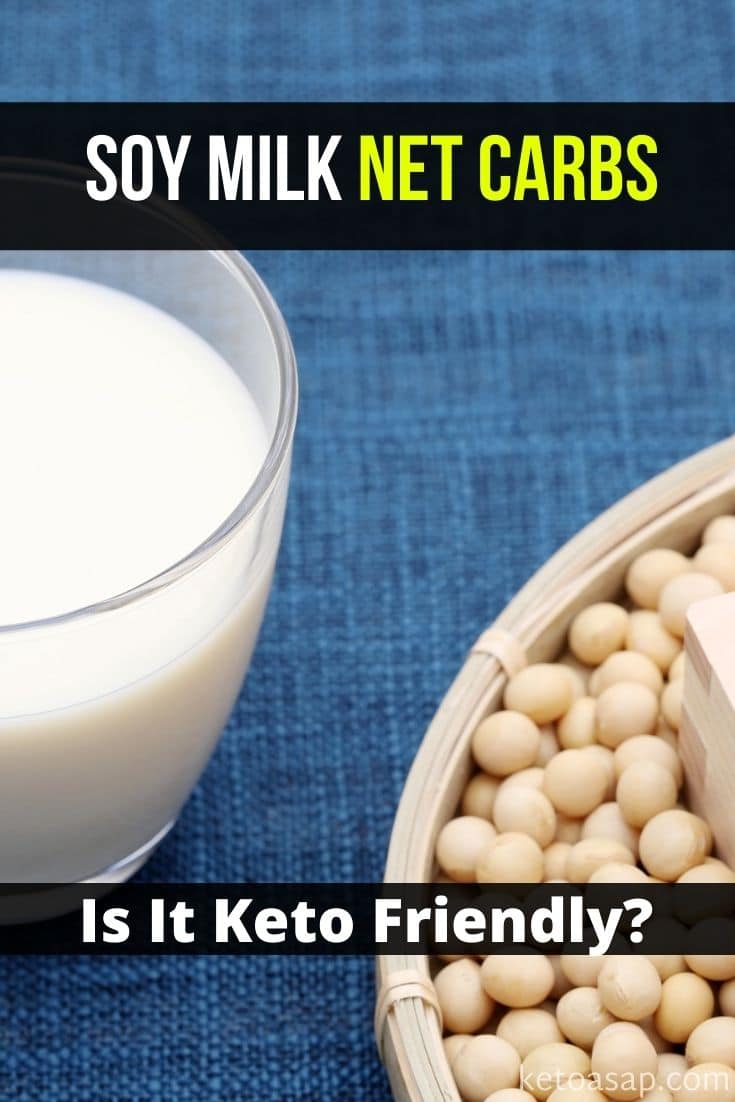