Let’s talk about cornstarch. Cornstarch is a white powder intended for nutritional use when baking or cooking. It is an isolated starch from corn kernels used at the very beginning of its career to sterilize laundry in laundries. Today, because of its low cost, it finds application in the production of food to reduce the cost.

Almost the entire number of calories comes from carbohydrates (almost 91%) which is why it can’t be used in keto or low carb diet. It has 381 calories per 100g. The good thing is it can help people who want to gain weight because of a good percentage of carbs.

If you run out of cornstarch or if you can’t use it because you’re following a low-carb diet, there are many alternatives to cornstarch that you can use for your cooking and baking. Below you’ll find a list of what we recommend.

As keto and low carb thickeners:

So many benefits of this ingredient! 28g or about two tablespoons supplies only 138 calories with 4.7 g of proteins, 10g of fiber and only 2 grams of net carbs. It also contains calcium, magnesium, phosphorus, vitamin B, zinc, etc… (2)

Almost all the carbs are fiber, which the human body doesn’t digest. Chia seeds are very high in omega-3 fatty acids. With all those facts, it can reduce the risk of heart disease and help better bone function.

A new study shows that chia seeds lead to gel formation when placed in water that can be easily extracted and applied as a thickener, emulsifier or stabilizer (3, 4).

The popular dish for chia seeds is chia egg. 1 tablespoon of chia seeds should be mixed with some water. After a few minutes, the already mentioned gel is created. The gel itself mimics an egg and can be used for making pancakes or pudding. For other purposes, they can be added to fruit juices, yogurt or oatmeal to improve nutritional value.

They are rich in vitamin B, calcium, potassium, magnesium. Also, omega-3 fatty acids, lignans, and fiber. With a rich source of lignans, which are antioxidants, they help lower the risk of cancer and improve health. The high fiber content can help lower cholesterol and improve heart health (6, 7, 8).

The main advantage of milled flaxseed to be used in bakery products is its carbohydrates (gums) and protein fractions. This gum has been reported to enhance viscosity, increase absorption in bread, significantly improve bread characteristics, act as a “food thickener” and “improving agent” in baked goods (9).

Before using the flaxseed itself, it would be better to grind it in a coffee grinder or some better blender, because they are more accessible to the body for digestion. As for the thickening of food in recipes, care should be taken of the amount as too much may over-harden the final product.

Flaxseed can be found in cereals, pasta, whole-grain bread and crackers, energy bars and snack foods. They can also be used in everyday food, like oatmeal, smoothies, soup, or yogurt.

Guar gum is one of a form of soluble fiber. With that in mind, it can slow digestion and therefore the rate at which a body absorbs glucose. For someone with diabetes of insulin sensitivity issues, this can be quite impactful as it aids in regulating blood sugar.

When it comes to weight loss, the best part about guars is a small amount getting from packaged foods. By slowing down digestion, a body feels full or more satisfied for a while. This promotion of satiety helps with appetite reduction.

There is also a big correlation between dietary fiber intake and reductions in cholesterol which means the more soluble fiber the body gets, the more chances for forcing the body to pull cholesterol out of the blood. And this is how cholesterol can be lowered (10, 11).

Like one of the food additives, it prevents ice from appearing in frozen products. For this reason, it is used in ice creams, pies, juices, sauces. It prevents fruit from leaking in sweets and also can increase the volume of bakery products.

With dairy products, especially cheeses, syneresis as one of the main problems leads to change. Guar gum enhances this process by affecting the activity of the liquid part (12).

It is very easy to use for dry soup mixes. You only need to use ¼ tablespoon of guar gum to create a thick texture.

Xanthan gum is a carbohydrate whose structure resembles cellulose. It gives the body a certain amount of daily fiber intake. Like guar gum, it may be able to lower blood sugar by slowing digestion and affecting how quickly sugar can enter the bloodstream. Also, people have noted increased fullness after consuming it. When talking about cholesterol some blood tests found that it is decreased by 10% (13).

The very small amount allows it to increase the viscosity of the liquid, although it is known as one of the more expensive food additives (14).

Due to the absence of protein and fat, and due to the fiber it contains, it is desirable in the diet because of its effect on the digestive tract by improving digestion and affecting the activity of good bacteria (15).

Xanthan gum is widely used in cooking in people who do not tolerate gluten. It provides optimum texture and mass of food without adding calories. A small amount is needed to achieve this effect. Frozen food, ice cream, drinks, spices are just some examples of its usage.

There is a chance, maybe flour has the addition of xanthan gum, but If necessary, a sufficient amount is 1 tablespoon or 2 tablespoons, depending on the product being made (muffins, bread…). Even better when combined with different gluten-free flour. It is very important to keep in mind the added amount.

It is rich in potassium, iron, and phosphorus. This tuber is prebiotic which supports the immune system, it fits a gluten-free diet and may fight diarrhea.

The arrowroot starch has a high gelling ability and digestibility. It  is commonly used as a thickener in many foods such as sauces, puddings, cookies, desserts, and other baked goods (18).

Arrowroot is suitable for neutral diets because of its bland taste. It is especially good for people who are feeling nauseous.

As for the advantages of arrowroot over the cornstarch, it is resistant to low temperatures and doesn’t cause food to burst after freezing or thawing. Thanks to this trait it can be used for making ice cream. Its resistance to acidic ingredients also allows it to thicken fruit gels or sauces.

Starch is an odorless white substance that is made by all green plants. Potato starch is the starch found in potatoes that are a product of the potato plant. A 100 gram serving of potato starch contains about 357 calories, 83 grams of carbs and 6 grams of fiber (19).

Some possible potato starch benefits for health are helping with blood sugar regulation, boosting good bacteria (it acts as a prebiotic in the body) and it is also gluten-free (for anyone who tries to avoid gluten).

It’s formed of amylose and amylopectin, which are responsible for its gel-forming at low temperatures. He finds his wide use in thickening soups and puddings. It is also used in the production of pastes, chewing gums, cakes, and other sweets (20).

One fact is that potato starch is a better thickener than cornstarch and very easy to use. In a dry bowl, mix with cold water and stir with a fork or whisk to break the lumps. After that, add it to your sauce, or any hot dishes and watch it begin to thicken.

Tapioca is mostly made of starch, which is easily digestible and has a beneficial effect on health. However, there is evidence of its toxicity due to the content of cyanogenic glucosides in the cassava plant (that’s inside the tapioca plant). Luckily later it was proved that they could be destroyed at higher temperatures (21, 22).

Tapioca doesn’t change the aroma or taste of food because of its neutral trait. It is ideal for use in salty and sweet meals with the addition of different ingredients. Also, It has a great power of thickening even at low temperatures. It is desirable to add it at the end of the cooking for maximum effect.

It shows many advantages over cornstarch. First of all, it has the same structure and doesn’t affect food color and It is mainly in a 2: 1 ratio of cornstarch. It is popular in gluten-free recipes, puddings, sauces, jams, pies.

When it comes to vitamins and minerals, their amount depends on the soil in which it’s grown. It has copper, folate, manganese, and selenium. Due to its gluten content, it is not suitable for people who are gluten intolerant, as well as for people who have problems with insulin.

Flour contains gluten, a protein whose function is to collect gas bubbles and maintain an ideal texture that will not fall off after a while. Its power as a thickener has been proven especially when heated (24).

Like tapioca, it is used in a 2: 1 ratio of cornstarch. It is widely used in bakery products, pasta sauces, pasta…

Is cornstarch allowed on the keto diet?

No, cornstarch is not keto-friendly so you should avoid it on the ketogenic diet.

What is a good cornstarch substitute for keto?

When it comes to thickening sauces and soups, there are many alternatives to cornstarch, keto or non-keto. Different nutritional composition allows them to be used in foods to improve structure and composition. Thanks to this feature and the nutritional facts on the declarations, health can be affected and improved. It is too expensive to break it because of this very cheap thickener.

Fun fact is that every kind of food or ingredient can become unhealthy when consumed in excessive amounts. With that in mind, the core of a healthy diet is the balance between healthy and unhealthy ingredients. 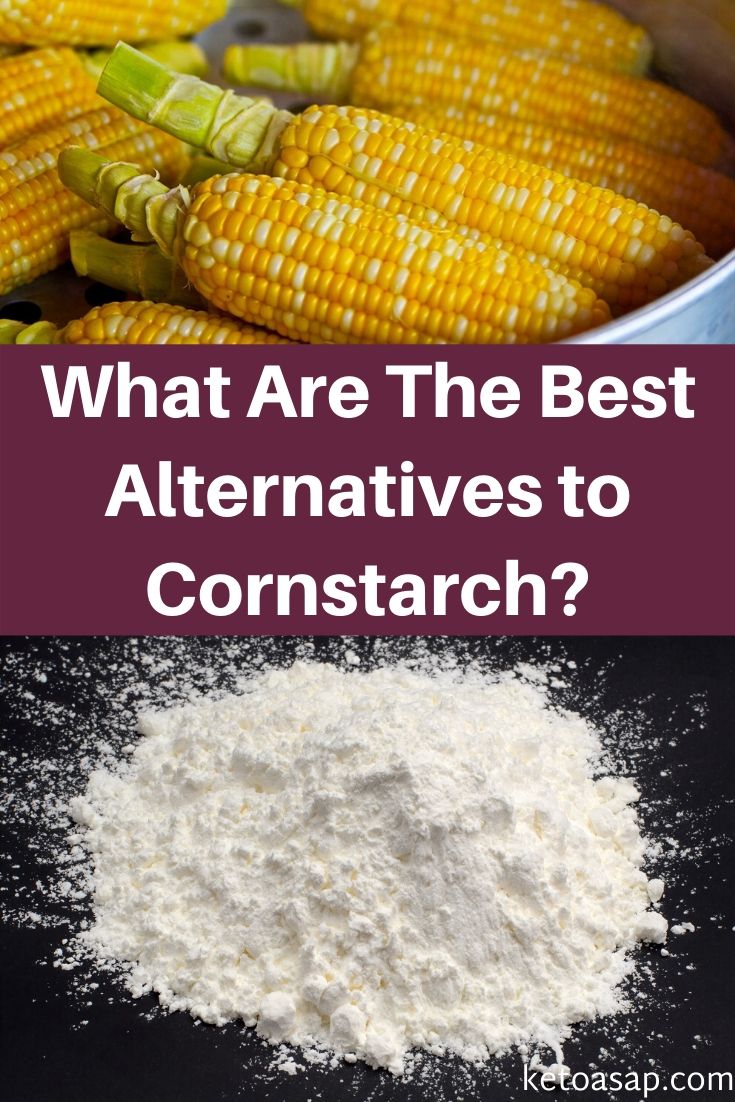