For a lot of people, summer days and nights mean eating tasty and refreshing fruits. And can you blame us? What is better than a cold, juicy slice of watermelon in the hot, sweaty summer months? It is one of the best ways to refresh yourself and regain some energy.

Watermelon is a fruit that is related to cucumbers, pumpkins, and melons and it most likely originates from West Africa. It is a highly cultivated fruit worldwide and can be eaten raw or pickled, and its rind is also edible after cooking.

Glycemic Index (GI) value is a number from 0 to 100 that is given to food to represent how fast the blood sugar will rise two hours after consumption of the food. The GI scale is a relative scale that compares foods to pure glucose- which has a GI value of 100.

The Glycemic Index (GI) value for raw watermelon is 76 ± 4, which means that watermelon is in the high range, it causes a fast blood sugar and insulin spike. (*)

We know that watermelon is tasty, but is it also healthy?

Well, just like others in its family, watermelon has a high water content- it is about 92% water, which means that it can be a great way to refresh and rehydrate.

Apart from its water content it also contains a few important nutrients such as vitamin C, carotenoids, cucurbitacin E, and lycopene.

Vitamin C is a vitamin that is essential for human health as it is a powerful antioxidant that can help combat and prevent chronic diseases such as cardiovascular disease, cancer, cataracts and it can help fight the common cold by bettering immunity. It also plays a role in growth and development, as well as the absorption of iron into the bloodstream. (*)

Cucurbitacin E is a member of a group called cucurbitacins. In high doses they are toxic, but research has shown that they have beneficial properties in the prevention of inflammation, cancer, atherosclerosis, and diabetes when they are in adequate doses. (*)

Carotenoids are mostly plant-based chemical groups that include alpha-carotene and beta-carotene- chemicals that your body converts into vitamin A- a liposoluble vitamin. (*)

Lycopene also belongs to carotenoids, but it does not convert into vitamin A. Lycopene is what gives the red color to plants- such as watermelon and tomatoes. It is a strong antioxidant and it has been linked to many health benefits.

There is research that shows that lycopene can help prevent, lower the risk and/or slow the growth of some forms of cancer such as prostate cancer and breast cancer, lung cancer. (*), (*), (*), (*)

Some research also suggests that carotenoids, including lycopene, may help reduce the risk for cardiovascular diseases and cholesterol levels, as well as lower oxidative stress and inflammation. (*), (*), (*)

Can You Eat Watermelon On The Keto Diet?

There is no doubt that watermelon is one of the best-tasting and refreshing fruits out there, which is perfect for summer days. But, when you look into the table of nutritional information you can see that 100 grams of raw watermelon contain 7.15 grams of net carbs.

To put this into perspective, 100 grams are less than half of a medium-sized slice of watermelon, and that contains close to half of the daily carbs of a strict keto dieter.

On top of that, watermelon has a high GI value of 76 ± 4, which means that it raises blood sugar and insulin levels fast after absorption. This means that it can definitely kick you out of ketosis or prevent one from starting.

How many net carbs does watermelon have?

No, watermelon is not strictly keto-friendly as it contains almost half of the daily carbs of a strict keto dieter and it has a high GI.

While watermelon is a great way to satisfy your sweet tooth while rehydrating and refreshing yourself, unfortunately, it’s sweetness does not fit into the strict keto diet and it should be avoided.

If you are on a low-carb diet and you still want to consume watermelon, we recommend that you carefully watch over the serving size. 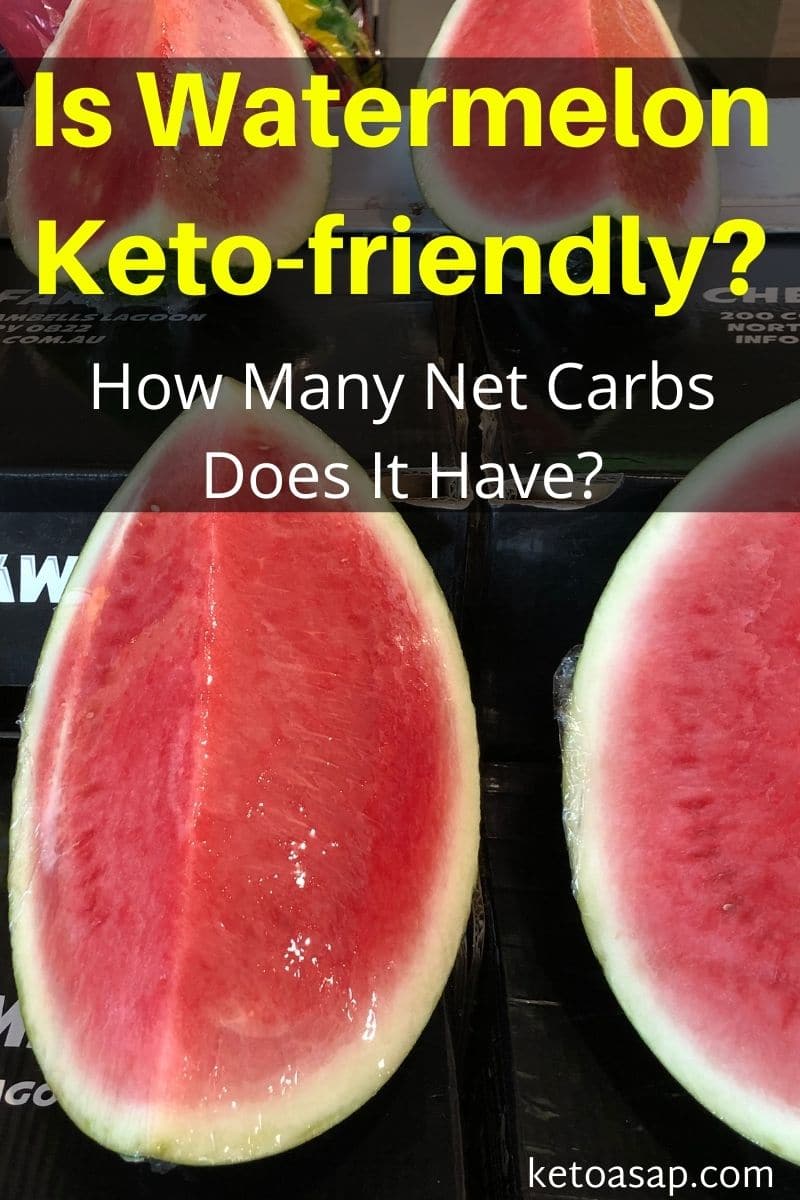