We all love pasta, but unfortunately, it is a high-carb food. That means that it is unsuitable for keto or low-carb diets. Still, if you can not have it, it does not mean that you do not crave it. Spaghetti is probably one of the foods you crave and miss most when you are on a keto diet or a low-carb diet.

So, naturally, people in the low-carb and keto community are constantly looking for an alternative to high-carb pasta. That is how spaghetti squash came into consideration. Still, can you enjoy this pasta alternative AND keep it keto or low-carb?

To get answers to all your questions, keep on reading!

What is Spaghetti Squash?

Spaghetti squash is also known as vegetable spaghetti. It belongs to a group of cultivars that fall under the species of Cucurbita pepo. Botanically, this plant is a fruit, although most people refer to it as a vegetable.

People cultivated this unique fruit in fall, and it comes in a variety of sizes and colors. The colors can range from ivory to yellow and orange, where orange has the most carotene. Apart from the colorful meat, the inside of the fruit contains large seeds.

Though, the vibrant colors are not the thing that makes this fruit unique. When it is raw, it does not differ much from other species of squash- it is hard. However, when you cook it, its meat gets softer and falls in long strands that resemble spaghetti- hence the name spaghetti squash.

How is it made?

People have found many creative ways to cook this fruit. Some of the most common ways to prepare it include baking, broiling, roasting, or even microwaving it. After you cook it, you can take a fork and separate the strands of spaghetti squash.

So, now you have plain spaghetti, and how you enhance it from here on- is entirely up to you. One popular way to do that is by baking or topping it with spinach and cheese, such as parmesan. Although, you are free to add your sauces, toppings, meats, or other vegetables to customize it to taste.

Below, you can see the nutritional information on 100 grams of this unique fruit both raw and boiled with salt. Keep in mind that the information provided does not include any sauces or toppings you might find in meals containing spaghetti squash. (*) (*)

Apart from being low-calorie, winter squash, including the squash we are talking about today, has several health benefits because of its micronutrients. It is a good source of vitamin C, manganese, vitamin B6. And, it contains small amounts of magnesium, thiamine, folate, iron, and calcium.

It also contains a considerable amount of fiber. Fiber plays a role in digestion, specifically in slowing it down. It slows the emptying of the stomach, and you will fill fuller for longer periods. (*)

Additionally, the fiber present in food helps stabilize the blood sugar levels by delaying glucose absorption, increasing the extraction of insulin in the liver, binding bile acids, and increased insulin sensitivity at the cellular level. (*)

Antioxidants play a role in the prevention of some cancers, diabetes, and other chronic diseases. (*)

Beta-carotene, the plant pigment that is present in orange vegetables and other plants, like the one we are talking about, is a part of a group called carotenoids and is a powerful antioxidant. (*)

That means that not only is it low in calories, but it is also low in carbs. At 5 grams per 100 grams, you can incorporate it into almost any keto or low-carb diet. Of course, the number of carbs would greatly depend on what you add to it.

However, if you keep your toppings and sauces keto-friendly, you can create a nice meal with minimal carbs that will be easy to incorporate into a low-carb diet. You can be generous with the high-fat toppings since it is so low in calories and fat.

Therefore, to answer the question, can you have spaghetti squash on the keto diet? The answer is yes if you make it the right way! Since it is fresh produce, you get it minimally processed, and you can cook it however you like. You can add keto-friendly toppings or make a keto-friendly sauce, and you can enjoy this even if you are on a strict keto diet! If you want an idea, you can try our Stuffed Keto Spinach, Cheese and Bacon Spaghetti Squash recipe.

If you choose to eat it at a restaurant, ask what toppings they use to avoid adding more carbs to your meal.

How many net carbs does spaghetti squash have?

In a 100 gram serving, there are 5 grams of net carbs in spaghetti squash boiled with salt.

Yes, it is keto-friendly.

Yes it is very low carb compared to many other root vegetables.

Spaghetti squash is a winter squash that people use as a pasta substitute for those who want the experience, but not the carbs of spaghetti. When cooked, this unique fruit comes off in strings, which resemble the popular pasta dish. Except, it is low-calorie and low-carb.

When you boil it, there are 27 calories and 5 grams of net carbs per 100 grams. That makes it easy to incorporate into a low-carb diet and even a strict keto diet. Of course, it all depends on what you add to it.

To keep it low-carb, you can add some meat, such as chicken cubes or bacon, or some low-carb vegetables. Adding meat will also increase the fat since by itself it is very low-fat. 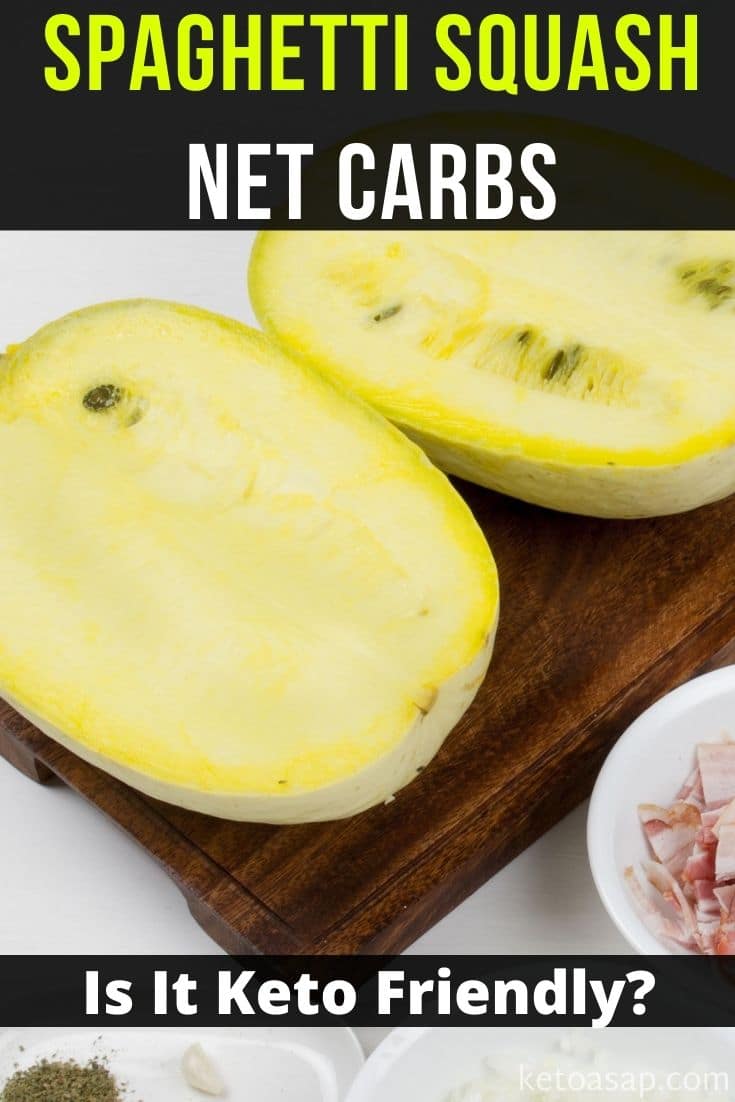