Hummus has become a very popular dip, spread, or a side dish in recent years. And its popularity doesn’t seem to stop rising.

The creamy, garlicky and slightly acidic taste of hummus has won many hearts- and taste buds, and that is what makes it the perfect dip for veggies, crackers, or even as a side dish along with meat.

But, will hummus affect your ketosis? Can you eat it on the keto diet? Keep on reading to find out everything you need to know.

Hummus is a savory dish, spread or dip made with cooked chickpeas that are mashed and mixed with tahini, garlic, olive oil, and lemon juice. Sometimes other spices are added to enhance its taste.

The word “hummus” comes from Arabic origin where hummus means “chickpeas” and it is a variant of the words ḥimmiṣ or ḥimmas. The full name for the spread in Arabic is ḥummuṣ bi ṭaḥīna, which means hummus with tahini.

There are many theories about the origin of hummus, but it is assumed that it most likely first appeared somewhere in the Middle East, but there is not enough sufficient information to know the precise location and origin of it.

What we do know is that cold, pureed chickpeas with tahini, garlic and lemon juice do not appear anywhere in written form before the Abbasid period in the Levant and Egypt.

The first written recipes on hummus bi tahina are found in cookbooks that have been written in the 13th century in Cairo, Egypt.

Today hummus is a popular side dish, spread, or dip not only in the Middle East and the Mediterranean, but it has won the hearts of people all around the world, so today it can also be found in grocery stores around North America and Europe.

Chickpeas or also called garbanzo beans, Egyptian peas, or Bengal grams are an annual legume that belongs in the family of Fabaceae.

Even though they are the base ingredient in hummus, chickpeas have been used in many other traditional dishes such as chana masala, as well as modern and common dishes like soups, salads, stews, and curry. They can also be baked or dried and eaten as a snack.

Tahini or also called tahina is a condiment that is made from toasted hulled sesame seeds and its use takes back about 4000 years.

It is used by many cuisines around the world, but most commonly the Levant and Eastern Mediterranean, the South Caucasus, and some parts of North AfricaTahini is the main ingredient in hummus, but it also has many other uses like as a dip by itself, as well as an ingredient in halva and baba ghanoush.

Here is the nutritional information on 100 grams of hummus (*):

Are Chickpeas Good For You?

Hummus contains ingredients that have many health benefits. For example, it contains chickpeas, which contain a lot of beneficial dietary fiber that can help increase the beneficial gut bacteria.

This was proven in a study that monitored 12 healthy adults who consumed 200 grams of chickpeas a day or raffinose fiber from chickpeas for three weeks.

The results showed an increase in beneficial bacteria in the intestines and a decrease in harmful bacteria, therefore they can aid digestion.

This effect that the fiber of chickpeas has is because some of the fiber gets converted by the gut into a short-chain fatty acid called butyrate. Butyrate is known to nurture and protect the cells of the intestines, and it also has other beneficial effects, such as lowering the risk of colon cancer. (*), (*)

Additionally, there are studies that show that eating chickpeas can reduce “bad” LDL cholesterol and in turn protect heart health. In one study, 45 adults either added chickpeas or added wheat to their diet over a period of 5 weeks.

The results showed that people who added chickpeas had 4.6% lower LDL cholesterol than those who added wheat. (*)

Another thing that is healthy for the cardiovascular system is olive oil, which is also an ingredient in hummus.

An analysis of 32 studies with over 800.000 people, came to the conclusion that people who consumed healthy fats, especially olive oil, had a 12% lower risk for death because of heart disease and 11% had a lower risk of overall death. (*)

Sesame seeds, which are what tahini is made out of, also contain antioxidants that can reduce inflammation markers like IL-6 and CRP, which are high in people who suffer from arthritis and other similar inflammatory conditions. (*)

Can You Eat Hummus On The Keto Diet?

Hummus contains many nutrients that are healthy for you, however despite all the health benefits it has, and even though the net carbs that it contains aren’t extremely high, its main ingredient- chickpeas, unfortunately, are not ketogenic.

Chickpeas are legumes and they, like other legumes, are generally avoided on the strict keto diet. They have a GI (glycemic index) of 28, meaning that they do affect blood glucose and may kick you out of ketosis. (*)

But, if you are on a low carb diet, then a tablespoon or two of hummus may not do much harm, just make sure to measure and control the serving size.

No, hummus is not strictly keto-friendly as it contains chickpeas, which are legumes. However, hummus is perfect for a low-carb diet.

How many net carbs does hummus have?

Hummus is a spread or dip that has been used for centuries and has Middle Eastern origin. It is a mix of pureed chickpeas, garlic, olive oil, and tahini.

While it is a popular and tasty side dish, dip, or spread, it is not strictly ketogenic. That is because chickpeas are legumes and most strict keto dieters avoid all legumes, as they are usually high in carbs. 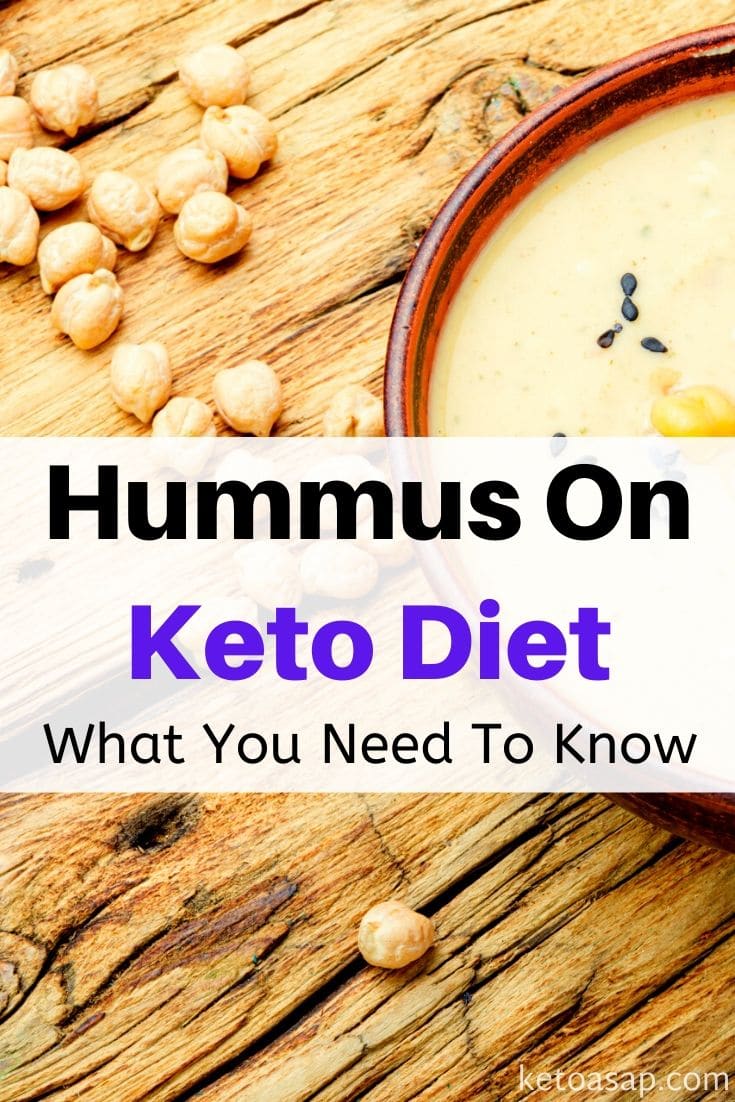